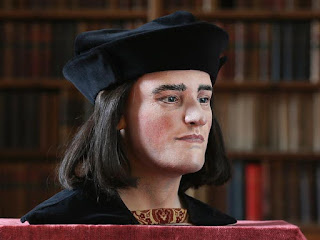 It's the Plantagenets against the Tudors again: Richard III vs. Henry VII. This blog post from History Today sums up the debate pretty well.

The discovery of the remains of Richard III is an archaeological find of the highest importance and the University of Leicester richly deserves its moment of glory. Much less deserving is the Richard III Society, who, predictably, are proclaiming the find as vindication of their long campaign to rehabilitate their hero. It is nothing of the sort.

For years the Society has protested that the idea of Richard as a hunchback with one shoulder higher than the other was pure propaganda by the Tudors. We now see that the Tudor propagandists (and indeed Sir Laurence Olivier) were entirely right: Richard had severe distortion of the spine and a shoulder markedly higher than the other. Tudors 1; Ricardians nil.

The Society has long claimed that the famous portrait of Richard III in the National Portrait Gallery is a piece of wicked Tudor propaganda designed to make him look evil. The reconstruction of Richard's face from his skull shows that the portrait is in fact a remarkably good likeness. Tudors 2; Ricardians nil.

The Society is always claiming that Richard was a popular, much-loved King. The bones cannot be expected to prove this one way or the other, but the evidence of a knife thrust into his corpse's backside does not appear to suggest that Richard's passing was mourned by those on the scene: it contrasts sharply, for example, with the reverence with which Charles I's body was treated after his execution. Not conclusive, I grant you, but judging strictly on the evidence of the bones: Tudors 3; Ricardians nil. [I think this is rather weak: Richard III was killed on the field of battle with emotions running high; Charles I was beheaded in an orderly, public, "legal" execution.]

Philippa Langley of the Richard III Society said on seeing the face, "It doesn't look like the face of a tyrant. I'm sorry but it doesn't." Well, I'm sorry, but my first thought on seeing the face was that I have never seen such ruthlessness in a human face in my life. We'll call that one a draw.
History Today also provides a summary of Richard III's life and reign with this interesting conclusion (different author than above, of course):


Richard might have been an excellent king if he had won the battle of Bosworth. Victory in battle would have vindicated him in the eyes of many and delivered God’s favourable verdict on the usurpation. His intelligence, vigour and vision might well have delivered a period of good rule. Instead, he died ‘fighting manfully in the thickest press of his enemies’, within yards of his nemesis, Henry Tudor. We can never know whether Edward V might have been a strong ruler, but the likelihood is that a power struggle would have ensued and the spectre of civil war would have been raised again. Richard’s character, and the trajectory of power he had experienced, made subjection and obedience to those he considered his inferiors impossible. The usurpation guaranteed the preservation of strong central authority, but it was the Tudors who benefited from it. The Yorkist achievement, in making royal administration more accountable and effective, did survive Richard’s death, even if the dynasty itself was all but destroyed.

But there are more debates occasioned by the identification of Richard III's body: where should Richard III be buried: York or Leicester? (That seems to be settled.) With what service: Catholic or Anglican? Surely, Catholic, since that is what he was. And can we dig up the bones of the Princes in the Tower buried at Westminster Abbey to figure out who killed them: Richard III or Henry VII? No, says the Abbey. The reputations of Shakespeare and St. Thomas More are also up for debate, ala Josephine Tey.

Out of all this debate, I'd say the most constructive thing is that it proves how important history is, how essential the past is to today as the battle of Bosworth Field rages on. We are still examining the structures of power, of religion, of truth and propaganda in the 15th and 16th centuries in the 21st: we want to know what is good, true and beautiful in the past and in the present. Truth, goodness, and beauty matter. We want to find them and be able to proclaim them. May I suggest that we are currently looking at the wrong grave? We should be looking at the Empty Tomb and the Resurrection of the One, Jesus, Who is the Way, the Truth, and the Life, in Whom Truth, Beauty and Goodness meet! Amen.
Posted by Stephanie A. Mann at 12:30 AM

Email ThisBlogThis!Share to TwitterShare to FacebookShare to Pinterest
Labels: Henry VII, Leicester, Richard III, The House of York, The Tudor Dynasty, The Wars of the Roses, York