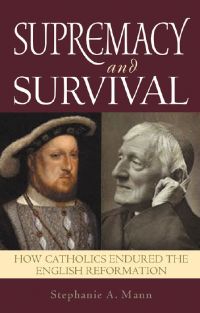 Today's topic is The Long Eighteenth Century for English Catholics after the "Glorious Revolution" of 1688 until the first Catholic Relief Acts of 1778 and 1791. During this period, Catholics were really at their lowest point since Henry VIII's Break from Rome in 1534. They were but a small minority, they had no national center at Court (as they had throughout the 17th century with the original Stuarts), and in Enlightenment England, with the Broad Church mentality of the Church of England, they weren't really even worth persecuting!

I'll start with the story of James II's reign, his attempts to bring about religious freedom through an Act of Indulgence, and the invasion of England by the Dutch, invited by Members of Parliament and the Church to keep Protestantism safe in England from James and his Catholic son and heir. Then the story has two narratives--the new Stuarts, William and Mary, then Anne, and the Parliamentary acts that prevented Catholics from even being near the throne: no Catholic monarch, no Catholic spouses allowed; while the old Stuarts, James II and his heirs in French exile, led invasions in Ireland and Scotland, attempting to regain the throne, especially when the Hanoverian dynasty came to England.

I'll describe how the Latitudinarians took over leadership of the Church of England when the High Church Anglicans lost power, especially after the Non-Juror movements meant the loss of some of the better bishops, including an Archbishop of Canterbury and two great spiritual writers, Thomas Ken and William Law. All of this history, of course, is laid out in the narrative of Chapter 9 of Supremacy and Survival: How Catholics Endured the English Reformation.

As for Catholics, as I mentioned, they were at the lowest point in their history, but there are a few high points:

Richard Challoner is one of the heroes of this era: as Vicar Apostolic, he worked to remind Catholics of their heritage in England. He completed the great work of gathering details about the martyrs of the 16th and 17th centuries which would be the basis on their causes for canonization in the 19th and 20th centuries.

Alban Butler wrote his great Lives of the Saints, still a basic work of hagiography.

Fathers George Leo Haydock and John Lingard were born near the end of the 18th century and in the next century, they would produce great intellectual works. Father Haydock would write and edit a great Biblical Commentary, while Father Lingard would produce a great history of England that would redress some historical errors of the Whig version of history, paving the way for full emancipation of Catholics in 1829.

The Catholic Relief Acts of 1778 and 1791 will wrap up this episode, including the horror of the Gordon Riots, provoked by the first easing of restrictions on Catholic worship. I welcome all listeners of Radio Maria US to my blog, whether you're listening on one of their radio stations or on line or through one of their apps. I invite you to call in with questions and comments toll-free at 866-333-MARY(6279). Just a reminder, too, that podcasts of previous episodes of The English Reformation Today are available on the Radio Maria US website. Next week: Emancipation at Last! and four important dates: 1829, 1845, 1850, and 1870.
Posted by Stephanie A. Mann at 12:10 AM