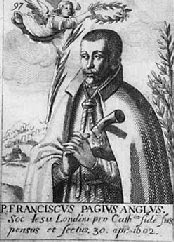 Thomas Tichborne (born at Hartley, Hampshire, 1567; executed at Tyburn, London, 20 April 1602) was an English Roman Catholic priest. He is a Catholic martyr, beatified in 1987.

He was sent a prisoner to the Gatehouse in London, but in the autumn of 1598 was helped to escape by his brother, Nicholas Tichborne, and Thomas Hackshot, who were both executed shortly afterwards. Betrayed by Atkinson, an apostate priest, he was re-arrested and on 17 April 1602, was brought to trial with Robert Watkinson (a young Yorkshire man who had been educated at Rome and ordained priest at Douai a month before) and James Duckett, a London bookseller (see yesterday's post). On 20 April he was executed with Watkinson and Francis Page, S.J. Tichborne was in the last stages of consumption when he was executed. Whether he was related to Chidiock Tichborne, one of the Babington Plot conspirators, I cannot tell.

Blessed Robert Watkinson was born in 1579 at Hemingborough, Yorkshire; he left England and studied at Douai, France, and then Rome in preparation for his ordination in 1602 in Arras, France. Sent home to work for the reconversion of England, he was arrested almost immediately and executed at Tyburn. Robert was hanged, drawn, and quartered on April 20, with Blessed Francis Page and Blessed Thomas Tichborne. He was beatified in 1929.

And here is the account of Blessed Francis Page's life and death--please note that he was the priest St. Anne Line was arrested for aiding:

Francis Page (portrait above) was born in Antwerp of well-to-do English Protestant parents. As a young man he embarked on a lawyer’s career and went to London to study law. He fell in love with the daughter of the Catholic lawyer for whom he served as a clerk, but she refused to marry him until he became a Catholic. His Catholic roommate had, as his confessor, Fr John Gerald, a Jesuit priest. So it was to Fr Gerald that Francis went for instruction. The more he studied religion, the more he felt drawn to the priesthood. Much to his fiancee’s sorrow, Francis called off the marriage as he began to think of the priesthood. When Fr Gerald was arrested and transferred to the Tower of London, Francis would stand outside the prison everyday just to get a glimpse of the priest and for his blessing. His suspicious actions led to a brief arrest and after his release, Francis decided to follow the call and joined the English College in Rheims, France. He was ordained in 1600.

Fr Page returned to London and was active in his priestly ministry for a year. He narrowly escaped arrest on one occasion just as he was about to celebrate Mass. He barely had time to remove his vestments, hid them, took a seat among the people who had come for Mass, when the priest hunters rushed in. The owner of the house who was hosting the mass helped him escape but she herself was arrested and later executed for harbouring a priest.
Posted by Stephanie A. Mann at 2:39 AM