Holy Saturday and the Easter Sepulchre 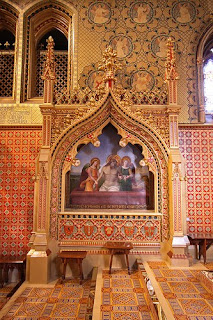 After the ceremonies of Good Friday, the priest took off his vestments and placed a pyx containing a consecrated Host with the Cross that had just been venerated, wrapped in linen cloths, in a sepulchre on the north side of the church. This was the Easter Sepulchre and candles would kept lit before it while the parish guarded it in vigil until Easter Sunday morning. Parish accounts document the expenses for candles and for food and drink supplied to those who remained on guard through the night of Good Friday, all day Holy Saturday and through the vigil of that night until dawn.

Then early Easter morning, the parish clergy would place the consecrated Host in the hanging pyx by the high altar and carry the cross in procession after it was solemnly removed from the Sepulchre, risen and acclaimed, with the church bells ringing and the choir chanting "Christus Resurgens" (Christ, risen from the dead, dieth now no more). The cross was then placed on a side altar and the people again venerated it throughout the octave of Easter.

Again, Eamon Duffy's The Stripping of the Altars is our source for understanding how deeply this devotion and ritual had taken root in medieval English Catholicism before the Reformation. As he says, these actions were "designed to inculcate and give dramatic expression to orthodox teaching, not merely on the saving power of Christ's cross and Passion but on the doctrine of the Eucharist." (p. 31) It was part of the furniture of the parish church, either as a freestanding wooden frame or as a niche or table tomb in the structure of the wall. Images of the sleeping soldiers, St. Mary Magdalen, the Risen Christ and adoring angels adorned the sepulchre. See this site for some examples and this one for more documentation.

As you might expect, this ritual was condemned by Archbishop Cranmer and the reformers especially during the reign of Edward VI, when it was forbidden. It was restored during Mary I's reign and church records document the expenses for the candles and the guards' supplies again--and then the sepulchres were destroyed and the ritual was forbidden again during Elizabeth's reign.

As the New Liturgical Movement blog documented a few years ago, A.W.N. Pugin included a Easter Sepulchre in the design of St Giles in Cheadle, Staffordshire, built throught the patronage of John Talbot, the Earl of Shrewsbury in the mid 1840s.
Posted by Stephanie A. Mann at 2:12 AM