The Death of James II and VII 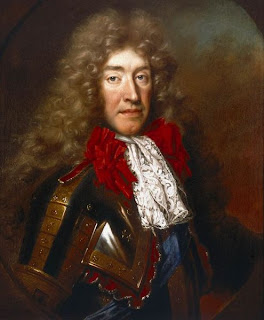 On September 16, 1701, the deposed King of England, Ireland and Scotland died in exile. Reading his list of titles, demonstrating the ups and downs of his life, I wonder if he read Boethius:

In March 1701, John Drummond, the Duke of Melfort, sent a letter that ended up in England, where his avowal that King Louis XIV would restore King James II to the throne created an international and diplomatic panic. When James found out about it at St. Germain-en-Laye, he suffered a massive stroke on March 4 in the midst of a Lenten prayer service. He and Queen Mary Beatrice went to take the waters at Bourbon for a month, but when they returned he was really no better. (He managed to exile Lord Melfort!) James suffered another stroke in July and another massive stroke on September 2--the end was clearly near.

Queen Mary Beatrice mourned her husband for a long time and found consolation in religious devotions and stays at the convent in Chaillot.

As I have noted before, I think that James II suffered horrible betrayals--his daughters, the Churchills, and other leaders of Parliament. He seems to have repented of his past sins of the flesh and infidelity to his two wives while in exile. He suffered the humiliation of exile and defeat and yet he worked to have his son prepared as well as possible for the duties of rule in England. May he rest in peace.
Posted by Stephanie A. Mann at 2:06 AM