Reflections on the Royal Wedding 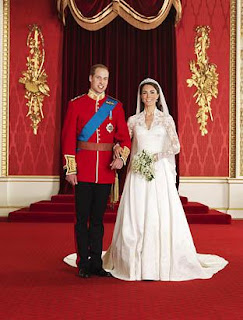 I did not think that I would have time to watch the Royal Wedding early in the morning on Friday, April 29 because my husband and I were getting ready to drive to a friend's wedding three and a half hours away later that day. But he encouraged me to watch some of the ritual. Born and raised in the USA, I cried when they sang "God Save the Queen." And I also cried when they sang "Jerusalem", because it's just so glorious. And I just wished that Diane Sawyer and the ABC News crew would quit talking about all the incidentals and concentrate on the reality of the wedding.

Some weeks before the Royal Wedding I happened to see a segment on one of those silly celebrity shows featuring supplies for those who wanted to be in London that day. The supplies included things like barf bags and packages of condoms(!), all emblazoned with William and Kate's pictures. Like Diane Sawyer and Robin Roberts, they really did not understand the reality of the wedding. It was not just a fancy dress day; the couple will someday soon announce the birth of a child to continue the succession; perhaps not as quickly as the father hoped in Yentl, but sometime in the not-too-distant future.

The sermon from the Anglican Bishop of London, the hymns chosen for the ceremony--

"Guide Me, O Thou Great Redeemer" (which was sung at Prince Williams' mother's memorial service in 2008)
"Love Divine, All Loves Excelling" (by Charles Wesley)
"Ubi Caritas et Amor"
"Jerusalem" (by William Blake and known to American audiences, as the news anchors intoned "from the movie Chariots of Fire")
"Blest Pair of Sirens" (by John Milton), not to mention
"God Save the Queen" (the National Anthem)

--the ritual of the wedding ceremony, the prayers of the Bishop and the Archbishop of Canterbury, and the prayer the Duke and Duchess of Cambridge wrote indicated the reality of the day: they are giving themselves to each other in the service of their country, of their people. This was not just another celebrity wedding with some additional pomp and circumstance.

Elena Maria Vidal linked to a great article from the Daily Mail in which columnist Melanie Phillips commented:

For here was one of the most striking aspects of that day. We are repeatedly told that Britain has now left religion far behind. And similarly, traditional marriage is said to be a thing of the past.

But last Friday, people in this apparently godless nation were held spellbound by a wedding ceremony which was explicitly not just religious but Christian.

What was even more notable was the special prayer composed by the happy couple themselves.

For in this they prayed for help to focus on the important things in life, to serve and to help the needy — all ‘in the spirit of Jesus’.

This was in effect an explicit dedication of themselves to a life of service to the nation on behalf of the Christian institution of the monarchy.

I just hope that if Charles, the Prince of Wales, does survive his mother, he leaves the coronation ceremony alone and ensures the continuity demonstrated by this Royal Wedding.
Posted by Stephanie A. Mann at 2:10 AM