Pope John Paul II and the Church of England 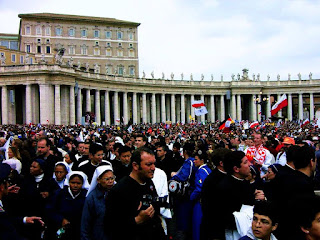 As Venerable Servant God John Paul II's beatification occurs today, it is interesting to look back at his funeral, when the cries of "Santo Subito" and "Magnus" echoed throughout St. Peter's square. We recorded NBC News broadcast that day and have watched it a few times. One of the most fascinating comments Brian Williams made at the time was what Pope John Paul II had really lived up John Lennon's Imagine lyrics: "Imagine no possessions . . ." when the author never did himself. On the other hand, all the people there were not just "living for today" and did not try to "Imagine there's no heaven"! (Photo credit: Wikipedia article on Pope John Paul II)

When John Paul II's funeral was scheduled in 2005, something else extraordinary happened: Charles, the Prince of Wales postponed his wedding to Camilla Parker Bowles so that he, the Archbishop of Canterbury and the Prime Minister of England (Tony Blair) could attend that tremendous event in Rome. As the New York Times commented at the time:

It is perhaps one of the stranger, if smaller, ripples to spread from the death of a pope in Rome that Protestants in England should begin to wonder what happened to the power of their faith. But as the funeral of John Paul II on Friday nears, some historians and columnists here have suggested that the English response to his death has shown, in the words of Mark Almond, an Oxford historian, that almost five centuries after its founding, "Protestant England is dead."

Nothing has done more to create that impression than the decision by Prince Charles on Monday to postpone his wedding to Camilla Parker Bowles, initially set for Friday, by one day to permit Prime Minister Tony Blair and the archbishop of Canterbury, the Most Rev. Rowan Williams, head of the Church of England, to attend the papal burial rather than a royal wedding. Even Charles himself--representative of a monarchy that broke with Rome in the 16th century--is planning to attend the funeral on behalf of his mother, Queen Elizabeth II, the head of state. That makes this country one of the few to be represented at the funeral by church, state and government.

"The funeral of a pope, let us be clear, has never until now been the sort of event deemed to require the attendance of the British prime minister--or even the archbishop of Canterbury," Martin Kettle wrote in his column in The Guardian. "It is hard not to catch one's breath at the rupture with national history that all this represents." Or, as Mr. Almond put it, "Henry VIII must be turning in his Windsor grave."

As Mark Almond noted in his original analysis, the "death of Protestantism" did not automatically mean triumphant new life for Catholicism in England. Secularism has replaced Protestantism, not Catholicism. The irony is that England's status as not only a Protestant nation but a fundamentally Christian nation is inscribed by the Coronation Oaths Elizabeth II took so many years ago. She promised not only to maintain the settlement of the Church of England, but to "maintain the Laws of God and the profession of the Gospel."A reader of this blog sent me his analysis of the Coronation Oaths and noted that Queen Elizabeth II did not receive any of the emblems of her official rule over the kingdom until she had promised to uphold the Church of the England and God's laws.

As another Royal Wedding has just taken place, observers wonder how long the special relationship between the Church of England and the monarchy will last. A columnist in The Independent suggests that the Church of England might benefit from disestablishment. Catholics and the Catholic Church in England need to follow the leadership that Pope John Paul II demonstrated especially during his visits in 1982, showing that England's Catholic heritage is alive and well--and the new members of Pope Benedict XVI's Ordinariate, Our Lady of Walsingham under the spiritual guidance of Blessed John Henry Newman will help them do just that. Blessed John Paul II, pray for us!