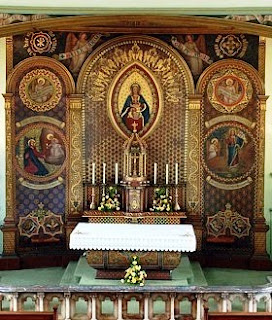 Thanks to Father Zuhlsdorf via the Catholic Herald, here is news of a fire at a Marian shrine in England in the Lancaster diocese which also has relics of the English Reformation martyrs. The Blessed Sacrament and the relics were rescued from burning:

A collection of relics belonging Reformation martyrs have survived a fire at the Marian shrine of Ladyewell in Lancashire, which left the chapel burned out.The Burgess altar at which St Edmund Campion, St Edmund Arrowsmith and Blessed John Woodcock celebrated Mass, and other relics of the Reformation, were rescued from the flames of a small fire which broke out at the Shrine of Our Lady of Fernyhalgh, near Preston, last week.Fr Tom Hoole, the director of the Ladyewell Shrine and parish priest of St Mary’s Fernyhalgh, discovered the fire in the chapel in the morning at Ladyewell House and called the fire brigade.The rescue team was able to save the Blessed Sacrament at the priest’s instructions, as well as the relics and other religious artefacts. These have suffered from smoke damage.
Here is the shrine's website, with more detail about the shrine.
The Ladyewell Shrine has been the site of devotion since the 11th century, which became a devotion to Our Lady Queen of the Martyrs’ after the Reformation. The reliquary holds relics and memorabilia belonging to the English Martyrs. The shrine was kept open during penal times, with only a short five year gap, and was the site for pilgrimages despite not having had an apparition. St Mary’s Fernyhalgh was built much later than the shrine in the 18th century.
Posted by Stephanie A. Mann at 2:01 AM