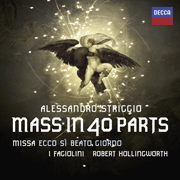 Available for pre-order at Amazon.com (USA), it has been a big hit in Britain! This is a Renaissance Mass by Alessandro Striggio, recorded by Decca. The package includes a DVD and a bonus of Thomas Tallis's Spem in Alium, also written with 40 vocal parts.

According to the Decca website--
Born c.1536/7, Alessandro Striggio was the natural son and heir of a Mantuan nobleman and soldier. In 1559 he joined the court of Duke Cosimo I de’ Medici in Florence, where he was the highest-paid member of its musical establishment. His elevated social status allowing him a dual diplomatic-musical function, he divided his life between work for the Medici, and his family and court connection in Mantua. Seven books of his madrigals were published besides many others in anthologies and a few sacred pieces. Equally important is the occasional music he wrote for Medici marriages and their entertainments. His son, of the same name, would later provide the libretto for Monteverdi’s Orfeo.
Describing the Mass--
What is striking about Mass and motet is how successfully Striggio writes on such a large scale, with little or no precedent to guide him. His sense of drama is terrific, the ever-changing combinations of choirs cunningly judged and never predictable. The harmony is conservative (this is only 1560s Italy), but there is no lack of expressive touches: soprano suspensions at “gloria tua” (thy glory) in the Sanctus; the dark harmonies at the Last Judgement clause in the Credo (“And he shall come again with glory to judge both the quick and the dead”). Striggio is careful not to over-use the full ensemble. In the Kyrie the five choirs are introduced in turn, allowing our ears to map out the aural geography before all five come together at the words “Glorificamus te” (we glorify you) in the Gloria, a magnificent moment. The Credo begins with a direct quotation of the opening of Ecce beatam, reserving the full ensemble for key textual moments. Predictably, one of these is “Et resurrexit tertia die” (And the third day he rose again). Less to be expected is the length and overt triumphalism of the tutti at “Et unam sanctam catholicam et apostolicam Ecclesiam” (And I believe in one holy, catholic and apostolic church). Was Striggio emphasising Florentine doctrinal orthodoxy and fidelity to Rome at the behest of would-be Archduke Cosimo? Or was he expressing the resurgent self-confidence of the Roman Church as the Council of Trent drew towards completion, its work of reform accomplished and the faithful prepared for the fight-back against what had once seemed irresistible Protestant incursion?
The English Connection--
In the Spring of 1567, having completed his planned itinerary with the performance of his Mass before the French court, Striggio wrote to Cosimo to ask if he might visit England to meet the “virtuosi of the music profession there”. He was graciously received by Queen Elizabeth and D’ogni gratia et d’amor was written in commemoration of the visit. The madrigal celebrates Britain’s mythical foundation by Aphrodite, who came to England’s shores in the guise of a leopardess. It is an (apparently) affectionate tribute to the Virgin Queen, stressing her supposed marital eligibility.
and the influence on Thomas Tallis--
Spem in alium, Tallis’s masterwork, is simultaneously a tribute to Striggio and a determined effort to upstage him. It draws on several specifically Italian techniques to be found in Ecce beatam and the Mass, besides others from the nascent North-Italian (“Venetian”) multichoir tradition that was supposedly terra incognita to English musicians of the time: and all seamlessly fused with his own native idiom. Striggio deploys the forty parts of his Mass in five eight-part choirs; Tallis has four choirs of ten though, like Striggio, he sets them out in convenient clef-groupings, which gives the false impression of eight five-voice groups. Striggio avoids the intricacies of scholastic counterpoint; Tallis shows off his mastery by driving chains of fugal entries through the entire ensemble: and to do so with so many parts he is virtually forced to forge a harmonic idiom that embraces unprecedented types and degrees of dissonance, adding a captivating element of harmonic spice that contrasts sharply with Striggio’s Italianate suavity.
Yet another pre-order!
Posted by Stephanie A. Mann at 2:02 AM