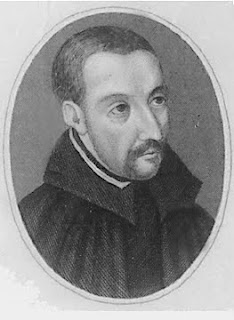 St. Robert Southwell was 33 years old when he was executed at Tyburn on February 21, 1595. When he cited his age during his trial, his torturer Richard Topcliffe mocked him for claiming equality with Jesus Christ. Southwell answered that he was but a worm.
It is hard to be temperate when writing about his arrest, torture and execution--it is obviously a horrendous blot against the Elizabethan "regime". He was betrayed by a woman that Elizabeth's pursuivant Richard Topcliffe had raped and blackmailed--he promised to find her a husband since she was pregnant with his child if she would turn Southwell in; he was tortured--illegally and excruciatingly--numerous times, starting with a visit to Topcliffe's personal torture chamber, while Elizabeth's officials looked on; then he was held in fetid conditions until his father visited him in Westminster's gatehouse and petitioned the queen to put him to death rather than leave him there, in his own filth.
Moved to the Tower of London he was held in greater but solitary comfort, but Queen Elizabeth allowed the sadistic Topcliffe to continue torturing Southwell, who had readily admitted his priesthood. Prior to his trial on February 20 he was moved into a hole called Limbo; the government did not even try to implicate him in any plot against the Queen; he was executed just because he was a Catholic priest. When he was executed on February 21st, the crowds made sure he was dead before the butchery began--and no one cheered when his severed head was displayed to the crowd. Indeed, Elizabeth's government recognized that they had gone too far--there was lull in executions of Catholic priests in London. Lord Cecil even ignored Topcliffe's desires to get started on new victims.
Robert Southwell was canonized by Pope Paul VI among the group called The Forty Martyrs of England and Wales. In addition to be a great saint and steadfast martyr, he is regarded as one of the great poets of the Elizabethan Age. Much of his poetry was written while he was held in solitary confinement in the Tower of London and was published posthumously.

Upon the Image of Death
by St. Robert Southwell, SJ
Before my face the picture hangs
That daily should put me in mind
Of those cold names and bitter pangs
That shortly I am like to find;
But yet, alas, full little I
Do think hereon that I must die.
I often look upon a face
Most ugly, grisly, bare, and thin;
I often view the hollow place
Where eyes and nose had sometimes been;
I see the bones across that lie,
Yet little think that I must die.
I read the label underneath,
That telleth me whereto I must;
I see the sentence eke that saith
Remember, man, that thou art dust!
But yet , alas, but seldom I
Do think indeed that I must die.
Continually at my bed's head
A hearse doth hang, which doth me tell
That I ere morning may be dead,
Though now I feel myself full well;
But yet, alas, for all this, I
Have little mind that I must die.
The gown which I do use to wear,
The knife wherewith I cut my meat,
And eke that old and ancient chair
Which is my only usual seat, --
All those do tell me I must die,
And yet my life amend not I.
Not Solomon for all his wit,
Nor Samson, though he were so strong,
No king nor person ever yet
Could 'scape but death laid him along;
Wherefore I know that I must die,
And yet my life amend not I.
Though all the East did quake to hear
Of Alexander's dreadful name,
And all the West did likewise fear
To hear of Julius Cæsar's fame,
Yet both by death in dust now lie;
Who then can 'scape but he must die?
If none can 'scape death's dreadful dart,
If rich and poor his beck obey,
If strong, if wise, if all do smart,
Then I to 'scape shall have no way.
Oh, grant me grace, O God, that I
My life may mend, sith I must die.

Brian Patrick and I will discuss this great saint--and make some points about "Shrove Tuesday" traditions (including the great International Pancake Day Shrove Tuesday Race competition between Liberal, Kansas and Olney, England)--this morning at 7:45 a.m. Eastern/6:45 a.m. Central. Please listen live here.
Posted by Stephanie A. Mann at 2:15 AM