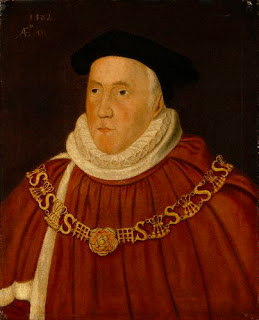 Edward Arden, cousin of Mary Arden, William Shakespeare's mother was most unjustly executed on December 30, 1583. Michael Wood's In Search of Shakespeare tells the story of his arrest and execution (although Wood cites the date of his execution as December 20 (typo?):

Although there is no evidence to suggest Arden was directly involved with a plot against the crown, his friendship with more militant Catholics would lead him into trouble. A key player in the 1580 mission of Edmund Campion, Robert Persons, was a close friend of Edward Arden's and probably used his home as a base. After Campion's Jesuit mission was thwarted, government informers (probably about as reliable a source of information as any modern day snitch) claimed that Campion had stayed at Park Hall, the Arden's ancestral home 20 miles north of Stratford, though this could never be proved. . . .
Despite Arden's arrest, the seizure of the Arden's priest, his wife and daughter's confinement in The Tower of London, and mountains of paper evidence purporting to show the link between Arden, Somerville and Throgmorton, no direct evidence of Edward's complicity in a plot could be found.
Even as he was being prepared for execution, Arden protested his innocence. Wood is probably correct that Arden's associations with prominent Catholics got him in trouble, but for a man to be executed for his associations rather than evidence of knowledge or connivance in a conspiracy is of course an injustice. The judge in his case, as in St. Edmund Campion's case, was Christopher Wray, Lord Chief Justice (pictured above). David Marcombe in a chapter of John Foxe at Home and Abroad, edited by D.M. Loades states that Wray was "a government man through and through" but perhaps indifferent in religious matters.
Posted by Stephanie A. Mann at 2:07 AM