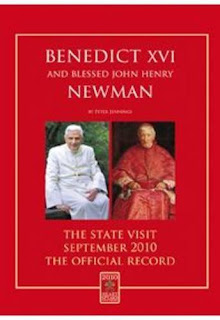 In the wake of Pope Benedict XVI's death on December 31, 2022, Father Juan Velez has been posting some interesting commentary on connections between the late Pope Emeritus and Saint John Henry Newman. The first I'd like to highlight also includes Pope Saint John Paul II, all on Faith and Reason (Fides et Ratio):
Since the sixteenth century there has often been a mistaken understanding and confrontation between faith and reason. John Henry Newman, Carol Wojtyla and Joseph Ratzinger are among the outstanding modern Christian thinkers who have best explained the correct relationship between faith and reason. These authors dealt with the problem of skepticism and moral relativism in culture, philosophy and religion.

In the mid-nineteenth century, John Henry Newman, delivered a series of sermons on the subject of faith and reason.These are known as his Oxford University Sermons. In these sermons Newman defends the rational nature of faith. For him the act of faith involves an act of reason. In other words, the faith is something which does not contradict reason but which reaches beyond the limits of reason. In one of the sermons, Newman explains: “(Thus) Faith is the reasoning of a religious mind, or of what Scripture calls a right or renewed heart, which acts upon presumptions rather than evidence, which speculates and ventures on the future when it cannot make sure of it.” The certainty of human faith is based on the confluence of many associations, perceptions and antecedent beliefs. But religious faith is based on God’s revelation of himself rather than human evidences obtained from the material sciences. . . .
Please read the rest there.
The second is about Pope Benedict XVI and Saint John Henry Newman on the Roman Rite of the Catholic Mass, which includes a discussion of Benedict XVI's Summorum Pontificum:
It is clear then that Newman found beauty and solace in the Mass. It is because of this very understanding that Pope Benedict sought to clarify his position regarding this venerable Mass of Newman’s time and the post-Conciliar Mass of Paul VI. He made it one of his priorities to introduce the ‘hermeneutic of continuity’ to show that the pre-conciliar liturgy of the 1962 Missal is the same liturgy as the Roman Missal of Pope Paul VI. For this reason, he termed the, Traditional Latin Mass “The Extraordinary Form of the Roman Rite” and the post conciliar Mass of Paul VI he termed “The Ordinary Form of the Roman Rite.” As Bishop Conley of Nebraska wrote, “Pope Benedict desired the traditions to harmonize … so the cross-pollination could take place; the very best of the reforms of the post-conciliar liturgy could be enhanced and influenced, by an open, unbiased acceptance of the Mass that preceded it.” Pope Benedict described his goal of a slow and gradual process that was meant to begin with Summorum Pontificum and could eventually result in a “mutual enrichment” of the two forms.

Newman’s love for Mass is evident, writes Fr. Michael Lang, of the Oratory of St. Philip Neri in London. He notes that Newman’s love for the Mass is evident in his novel Loss and Gain: The Story of a Convert, published anonymously in 1848. In this novel, there are descriptions of Mass and Benediction by the Catholic converts Willis and Reding, which are autobiographical. Fr. Lang writes that we know of Newman’s love of the Roman Breviary before his conversion, since he prayed the Divine Office daily at Littlemore. This prayer of the Church was very influential in his subsequent conversion. (quoted from “St. John Henry Newman and the Liturgy“ in Adoremus Bulletin).
At the end of that article, Father Velez directs readers to a chapter in a new book about Newman, edited by Father Velez and published by Catholic University of America Press: A Guide to John Henry Newman: His Life and Thought (I'll certainly have to wait for the paperback!)
One of my most treasured memories is the day Mark and I watched the Mass on September 19, 2010, when Pope Benedict XVI beatified John Henry Newman. We had watched as many of the events on EWTN as we could, and I obtained the official record of the State Visit (cover pictured above)! After the Mass and the commentary on EWTN concluded, my recorded episode with Doug Keck aired on EWTN's Bookmark!
Posted by Stephanie A. Mann at 12:00 AM