The Battle of Prestonpans and King Charles III

There was a comment/meme on Facebook when the King of England, etc., after Elizabeth II's death and his immediate succession, announced that he would be known as King Charles III, that there'd already been a King Charles III!
Of course, the meme was referring to the Young Pretender, Bonnie Prince Charlie, the grandson of King James II and VII, and the son of the Old Pretender, James Frances Edward Stuart!
On September 21, 1745, Bonnie Prince Charlie, fighting for his father's succession to the throne as King James III and VIII thirty years after the first attempt to invade England and claim the throne ("the Fifteen"), won a great battle at Prestonpans.
This was last, best chance of the Catholic Stuarts to take the throne of Great Britain by force. The Act of Succession denied them the legal right to rule, so it had to be through conquest. 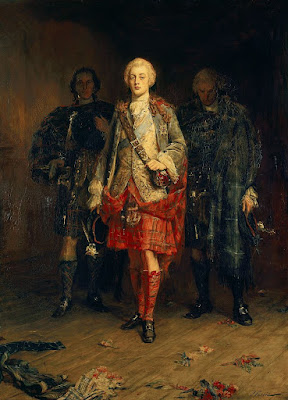 The Young Pretender's forces won a stunning victory at the Battle of Prestonpans against a larger, better supplied, and supposedly more disciplined Hanoverian Army, defending King George II's occupation of the throne. This website describes the two armies:
In September 1745, an army of British regulars mustered near the village of Prestonpans on the shores of the Firth of Forth.

The commander of the Redcoats was Sir John Cope. He was supremely confident of victory. Although the two sides were equal in number, Cope had more cavalry and artillery, and his infantry was trained to deliver well-aimed volleys. Facing west, moreover – towards Edinburgh, from which his opponents had marched – there were the walls and dykes of two grand houses providing protection for his men.
Cope’s opponents were the Jacobite army raised in rebellion some weeks before by Prince Charles Edward Stuart, the ‘Young Pretender’; he was the son of James Edward Stuart, the ‘Old Pretender’, who was in turn the son of King James II, ousted in the ‘Glorious Revolution’ of 1688. Charles’s shock troops were Scottish Highland clansman, most of whom spoke Gaelic, and were regarded as barbarians by most Lowland Scots and the English.

What was to happen at Prestonpans on 21 September 1745, however, was a signal humiliation for the British Army.
It was the charge of the Jacobite army that took the Hanoverian forces by surprise and routed them. The Young Pretender returned to Edinburgh and entered Holyrood House, as depicted in the painting above (Public Domain), by John Pettie, c. 1892. Sir John Cope and fewer than 500 survivors returned to England; Cope and his commanders faced a Court Martial.
King George II recalled his son Prince William Augustus, Duke of Cumberland and 12,000 troops from the War of Austrian Succession on the Continent to prepare a new army to prevent any further success of the Jacobites. And at the Battle of Culloden, Cumberland defeated the Young Pretender's army decisively on April 16, 1746. Charles Edward Louis John Sylvester Maria Casimir Stuart fled Scotland, protected by many Jacobite Highlanders, including Flora MacDonald, leaving on September 19 and arriving in France on September 29, 1746.
The Young Pretender never returned to Scotland, although he did travel to London in September, 1750. According to The Jacobite Heritage website, "It is commonly believed that on this occasion he apostasized from the Catholic Church and conformed to the Established Church of England." He thought that would strengthen his claim to the throne. He did return to the Catholic Faith before he died on January 30, 1788 (January 30 was the anniversary of his great-grandfather Charles I's beheading). He and his father and brother (Henry Cardinal Stuart) are buried in St. Peter's Basilica in Vatican City, Rome, in a monument to which the future George IV (the Prince Regent) donated funds to complete!
Posted by Stephanie A. Mann at 12:00 AM