Some Contemporary Reactions to Newman's Conversion

I've been helping, in a small way, with a project not my own about which I should not say much, except that it is about St. John Henry Newman.

While doing some of my own research, I stumbled upon a series of essays by John R. Griffin in Christendom College's Faith & Reason, part of that author's reinterpretation of the Oxford Movement and Newman's role in it. (Just search for his name on the Faith & Reason archive page--the college stopped publishing the journal in 2005 after 30 years). One of these essays really shocked me: I don't remember reading about the calumnious and treacherous actions of some of Newman's so-called friends. Note that this is before he "Poped":

Pusey was the first to suggest that something be done to diminish the impact of Newman’s conversion. Pusey and Keble expressed the hope that Newman would go to the continent to make his profession of faith.6 Manning, Isaac Williams, [Charles] Marriott, Pusey and several other high­churchmen conferred on the subject. The Manning correspondence of these years is marked “confidential”, and it appears that Manning asked Williams for a meeting in London to discuss what should be done about the pending event. Manning asked Williams to tell him all that he knew about the Newman affair and anything that Newman might have told him (Williams).7 The image of the future Cardinal that comes through these letters is not a pleasant one; and when scholars, like D. Newsome, profess their inability to understand why people prefer Newman to Manning,8 they might look at this correspondence for their answer. Manning’s Charge of 1845, in addition, does nothing to enhance his reputation for fairness or accuracy on the Newman question.9

Meetings between Williams and Manning were arranged in London, but we have no knowledge of what was decided. All that we know is that Williams was apparently frightened by some of the measures proposed by Manning and determined, following Keble’s advice, to do nothing.10 The Manning plan or declaration was given up, and he, along with Williams, T. Keble, and Marriott, adopted a partial silence in response to the early converts. Marriott seems to have been the most disturbed among this group, and he coped with the event by adopting a useful piece of slander put forward by James Mozley-Newman had never been a true Anglican.11
What could Manning have been proposing? Something that could have opened them up to charges of libel? Something immoral or illegal or both?
Griffin goes on in "The Anglican Response to Newman's Conversion" to highlight the ongoing campaign in print by Pusey, Keble, Mozley, et al, to paint a portrait of Newman and other converts from the Oxford Movement like Oakley and Wilberforce, as hyper-sensitive, irrational, disloyal, and worse. One particular mode of attack was to claim a precipitous decline in moral qualities among Newman and his converts after they had become Catholics. The Achilli Trial, in which Newman was accused of libel, was used against Newman: he was a liar (of course, that was Kingsley's later charge to which Newman had to answer with the Apologia pro Vita Sua). Griffin also traces these kinds of attacks to some later historians of the Oxford Movement and its aftermath:
For a brief survey, see Abbott, The Anglican Career of Cardinal Newman (1892); Williams, Autobiographv (1892); Grafton, A Journey Godward (1910); Donaldson, Five Great Oxford Leaders (1905); Morse-Boycot, They Shine Like Stars (1947); Weatherby, Cardinal Newman and his Age (1973), 235ff; B.A. Smith, Dean Church: The Anglican Response to Newman (1958) contains little that might be construed as an attack on Newman’s moral character or reliability as an historian of the Oxford Movement and it has provided me with a title for this paper, but Smith suggests nothing in Church’s life or writings that might be regarded as a “response” to Newman. (footnote #44)
I have always known what Newman lost (and gained) by becoming a Catholic, but I had not read about this sustained and coordinated campaign against him and his conversion by those who had been his friends--no wonder his reunion with Keble and Pusey was so difficult 20 years later!
Griffin's conclusion reflects my own reaction:

With those who had known Newman during his Anglican years, it is less easy to be forgiving. I have argued that his friends, E.B. Pusey, John Keble, James Mozley, and the others, deliberately set out to discredit him in order to retain persons in the Church of England. Even this, though I believe it involved lying about Newman, is understandable but for one point. The faith of Keble and Pusey in the system they professed was far too shaky for them to attempt to advise others. Keble described himself once as in the role of “the blind leading the blind.”49 Pusey in many places admitted that the Oxford ideal was not working, in spite of the professed optimism in his published Letters.

It should also be remembered that those who went over to Rome suffered a complete alienation from their friends, the risk of slanderous attacks and estrangement even from relatives. There is one thing more. Those who went over, almost to a man, underwent severe financial reverses. Those who remained “loyal” to the Church of England, whatever may have been their relationship to bishops and laity,50 were at least spared that. 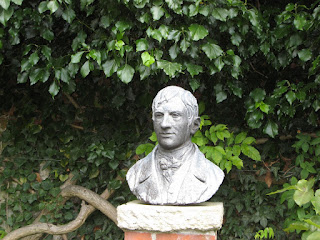 I noticed one interesting, ironic line in Charles Marriott's biography, linked above:  "He acquired possession of Newman's buildings at Littlemore in order to prevent them from being turned into a Roman catholic establishment, and used them for a printing-press for religious works, a scheme which caused him endless worry and expenditure." Newman's College at Littlemore since 1987 has been a "Roman catholic establishment" dedicated to Newman's memory, cared for by the sisters of The Spiritual Family the Work: 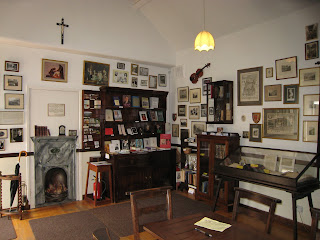 Newman’s oratory has again become a place of prayer and worship, with the officium, daily hours of Adoration of the Blessed Sacrament, and regular masses. A substantial and specialized collection of Newman-related literature has been built up on the site of Newman’s own library, together with an exhibition of Newman memorabilia (prints, etchings, photographs, sculptures and original letters).
I visited The College in 2009, prayed in the chapel, and enjoyed the gardens--the photos above are from that visit (C) 2010 by Stephanie A. Mann.
Saint John Henry Newman, pray for us!
Posted by Stephanie A. Mann at 12:00 AM