This Morning: An Intro to More's "The Sadness of Christ" 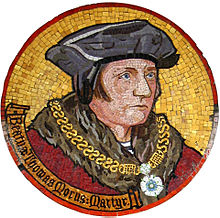 As previously announced, Anna Mitchell and I will start a Lenten series on the Son Rise Morning Show today--at my usual time (7:50 a.m. Eastern/6:50 a.m. Central) on the EWTN Radio network. We will discuss (with the hosts taking turns), Saint Thomas More's meditation on the Agony in the Garden every Monday during Lent. Listen live here or on your local EWTN affiliate.

The Sadness of Christ, with an excellent introduction by Gerard Wegemer is readily available from Scepter Publishers--or check with your local Catholic bookstore.

Today, however, Anna and I will just discuss the context of this work based on my preview post and this one more detail:

In what we might consider happier times, when Desiderius Erasmus was visiting England and meeting with John Colet at Oxford, Erasmus and Colet debated what Jesus, True God and True Man, really experienced in the Garden of Gethsemane. As the 19th century edition of the Dictionary of National Biography explains in its entry for John Colet:
Late in 1498 the two scholars talked at length of Christ's agony in the garden, and each gave a different explanation. Colet adopted St. Jerome's view, that the agony was not to be confounded with human dread of death, but was Christ's sorrow for the fate of his persecutors. Erasmus contended that Christ's human side was for a time dissociated from the divine, and, while defending his view in a letter written later, adopted the scholastic theory, that scripture was capable of a multiplicity of interpretations. The enunciation of this doctrine called forth strong disapproval on the part of Colet, who insisted on the unity of the Bible's meaning (Erasmi Disputatiuncula de Tædio Jesu, in Opera, v. 1265-94). Erasmus's opinion of Colet, although in details they were at times at variance, grew with increase of intimacy. He compared his conversation to Plato's, and represents him as the centre of the little band of Oxford scholars and reformers at the beginning of the sixteenth century which included Grocyn, Linacre, and Thomas More. Much to Colet's regret, Erasmus refused to actively join him in his Oxford labours, and left England for Paris early in 1500.

This modern Oxford Dictionary of Modern Biography entry highlights the impact meeting John Colet and Thomas More had on Erasmus, even though his first visit to England did not provide him the secure ($$) opportunities he'd hoped for:
On meeting Colet and More during this visit their friendship was so quickly cemented that Erasmus later penned glowing portraits of each for the benefit of a wider European audience. In Colet he recognized a pattern of Christian living which, as captured in his Enchiridion, persisted throughout his life and inspired his own devotion to education and humane letters; writing to Johannes Sixtinus, Erasmus described Colet as 'the defender and champion of the ancient theology' (Ferguson and others, 1.230), noting in the wake of Colet's death that 'I never met a more fertile mind' (Erasmus to Justus Jonas, 13 June 1521, ibid., 8.238). In Thomas More meanwhile he found a sweetness of both wit and character that were born for friendship. Colet's Oxford lectures on St Paul, despite his lack of Greek, breathed the new spirit to which Erasmus was drawn and embodied the biblical humanism that became Erasmus's hallmark.
Colet would later become the Dean of St. Paul's in London and More considered Colet his spiritual director. He died in 1519.
Erasmus returned to England in 1509, 1515, and 1517. Seymour Baker House writes in the Oxford work cited above that Erasmus had fond but melancholy memories of his times in England, especially as old friends died or were in trouble. He wrote to Guy Morillon, Charles V's secretary, that More was 'the best friend I ever had' as he lamented More's imprisonment. Erasmus died in 1536, a year and five days after More's martyrdom.
Posted by Stephanie A. Mann at 12:00 AM