On Monday, October 26, I watched Professor Kenneth Parker's Journey Home episode on EWTN. He is currently the Ryan Endowed Chair for Newman Studies, Professor of Historical Theology and soon will be the Chairman of the newly formed Department of Catholic Studies both at Duquesne University.

He grew up in a Christian community I'd never heard of before, the Pilgrim Holiness Church. He studied Historical Theology at the University of Cambridge, became a Catholic in 1982 and discerned a  vocation as a Benedictine monk in California before returning to the academic world. As he says on his page at Duquesne:

My original area of scholarship focused on early modern English theology, and I have published on English sabbatarianism, Richard Greenham, and Elizabethan pastoral care. In the late 1980s my research interests expanded to include John Henry Newman and Christian historiographical traditions. In the early 2000s, I began exploring the papal infallibility debates of the 1860s and how history was employed by key theologians. This research has drawn me into studies of two Irish American archepiscopal brothers, Francis and Peter Kenrick, who profoundly influenced the discourse on papal authority in the 19th-century North Atlantic Catholic world. Their Irish background has led to research on the Irish gallican tradition and its impact on Catholicism in the United States. 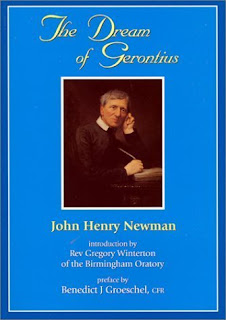 In the course of his interview, some viewers sent emails and one of them asked about a neglected or relatively unknown aspect of Saint John Henry Newman's works and thought. Professor Parker suggested that how Newman "re-imagined our understanding of Purgatory" in The Dream of Gerontius was one thing, continuing with the thought that Newman often regretted "from his first book" [The Arians of the Fourth Century] that doctrines celebrated doxologically through worship had to be defended through intellectual argument, removing them from their proper place.
What I interpreted him to mean is that the Divinity of Jesus was celebrated in the liturgy of the Church, but the attack on that Divinity by Arius meant that orthodox believers had to provide technical exegesis and theological arguments to defend and codify it.
Furthermore, I conclude that Professor Parker was saying that in The Dream of Gerontius, with its earthly and heavenly liturgies of prayer and praise, Newman was providing a fresh vision of Purgatory in its proper context--worship and awe of the Holy Trinity; the justice and mercy of God; the reality of sin, repentance, and expiation--all in the experience of a man dying in the state of grace, absolved of sin, and prepared for judgment by the traditions of the Church.
When Gerontius's Soul approaches particular judgment, he hears those at his deathbed praying for him, and his Guardian Angel explains:
It is the voice of friends around thy bed,
Who say the "Subvenite" with the priest.
Hither the echoes come; before the Throne
Stands the great Angel of the Agony,
The same who strengthen'd Him, what time He knelt
Lone in that garden shade, bedew'd with blood.
That Angel best can plead with Him for all
Tormented souls, the dying and the dead.
The Subvenite is the responsory prayed immediately after the Christian has died:
R. Subveníte, Sancti Dei, occúrrite, Angeli Dómini, Suscipiéntes ániman ejus, Offeréntes eam in conspéctu Altíssimi. Suscípiat te Christus, qui vocávit te, et in sinum Abrahae Angeli dedúcant te. Suscipiéntes ánimam ejus, Offeréntes eam in conspéctu Altíssimi.
V. Réquiem aetérnam dona ei, Dómine, et lux perpétua lúceat ei. Offeréntes eam in conspéctu Altìssimi.

V. Eternal rest give to him (her), Lord: and let perpetual light shine upon him (her). Offering it in the sight of the Most High.
This is what has been happening to Gerontius's Soul; the Angels of God have received it and are offering it "in the sight of the Most High" as the Soul goes to face God and Judgment. And after the Soul has received Judgment, Newman places a poem of great subtlety mixing joy and pain, longing and peace as the Soul is "happy in [his] pain", "Lone, not forlorn--" and will sing to "soothe [his] stricken breast":
Take me away, and in the lowest deep
There let me be,
And there in hope the lone night-watches keep,
Told out for me.
There, motionless, and happy in my pain,
Lone, not forlorn –
There will I sing my sad perpetual strain,
Until the morn,
There will I sing, and soothe my stricken breast,
Which ne’er can cease
To throb, and pine, and languish, till possest
Of its Sole Peace.
There will I sing my absent Lord and Love: –
Take me away,
That sooner I may rise, and go above,
And see Him in the truth of everlasting day.
[His Guardian Angel had warned his Soul that he would feel this way:
When then—if such thy lot—thou seest thy Judge,
The sight of Him will kindle in thy heart,
All tender, gracious, reverential thoughts.
Thou wilt be sick with love, and yearn for Him,
And feel as though thou couldst but pity Him,
That one so sweet should e’er have placed Himself
At disadvantage such, as to be used
So vilely by a being so vile as thee.
There is a pleading in His pensive eyes
Will pierce thee to the quick, and trouble thee.
And thou wilt hate and loathe thyself; for, though
Now sinless, thou wilt feel that thou hast sinned,
As never thou didst feel; and wilt desire
To slink away, and hide thee from His sight;
And yet wilt have a longing aye to dwell
Within the beauty of His countenance.
And these two pains, so counter and so keen,—
The longing for Him, when thou seest Him not;
The shame of self at thought of seeing Him,—
Will be thy veriest, sharpest purgatory.]
Sir Edward Elgar left that passage out of the libretto of his oratorio, but that image of the Soul seeing with spiritual eyes the love God has for him and how much the Soul has failed to receive that love worthily--and that moment "will be thy veriest, sharpest purgatory" is a re-imagining of the moment of Judgment and Purgatory, and even the immortal soul's reaction to its fate. It is ready for Purgatory now; it wants to be purified and prepared to enter that Presence again.
This is the passage that even Charles Kingsley, Newman's defeated opponent of the Apologia pro Vita Sua crisis could accept, as cited in this article by Robert Carballo:

I read the Dream with awe and admiration. However utterly I may differ from the entourage in which Dr. Newman’s present creed surrounds the central idea, I must feel that the central idea is as true, as it is noble, and it, as I suppose, is this: The longing of the soul to behold the Deity … that the soul is ready, even glad, to be hurled back to any depth, to endure any pain, from the moment it becomes aware of God’s actual perfection and its own impurity and meanness.

The Guardian Angel's description of Purgatory echoes a poem Newman wrote in 1853, "The Golden Prison", promising the presence of Angels even there--the Soul will not suffer alone.
Now let the golden prison open its gates,
Making sweet music, as each fold revolves
Upon its ready hinge. And ye great powers,
Angels of Purgatory, receive from me
My charge, a precious soul, until the day,
When, from all bond and forfeiture released,
I shall reclaim it for the courts of light.
And then the Guardian Angel's final words refer to "penal waters", a lake, and "bed of sorrows", as the Angels of Purgatory tend, nurse, and lull the penitent soul and prayers and Masses on earth make the time pass swiftly until she returns to convey his Soul to Heaven:
Softly and gently, dearly ransomed soul,In my most loving arms I now enfold thee,And o’er the penal waters, as they roll,I poise thee, and I lower thee, and hold thee.And carefully I dip thee in the lake,And thou, without a sob or a resistance,Dost through the flood thy rapid passage take,Sinking deep, deeper, into the dim distance.Angels, to whom the willing task is given,Shall tend, and nurse, and lull thee, as thou liest;And Masses on the earth, and prayers in heaven,Shall aid thee at the Throne of the Most Highest.Farewell, but not for ever brother dear,Be brave and patient on thy bed of sorrow;Swiftly shall pass thy night of trial here,And I will come and wake thee on the morrow.
Newman emphasizes that the sufferings of the Soul are outside of earthly time; it is not earthly days or weeks or months or years that pass but merely a "night", and the Guardian Angel will return "on the morrow".
Professor Parker mentioned Elgar's oratorio based upon Newman's poem: Dame Janet Baker's performance of this final aria is the perfect conclusion. Elgar's brilliance of weaving the prayers of the other Souls in Purgatory reciting Psalm 90 as the Angelicals sing "Praise to the Holiest in the Height" lead us to a peaceful Amen.
Farewell, but not forever.
Posted by Stephanie A. Mann at 12:00 AM