Our Lady of the Rosary and Edgar Allan Poe 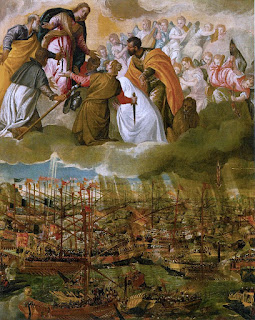 In the Catholic Church today is the feast of Our Lady of the Rosary, a feast originally dedicated in thanksgiving for Mary's intercession in the Battle of Lepanto, the naval battle won by the Holy League against the Ottoman Empire on October 7, 1571.
It is also the anniversary of the death of Edgar Allan Poe under mysterious circumstances on a Sunday in 1849. This article from the Smithsonian Magazine describes how Poe was found wearing strange clothing and incoherent outside a polling station on October 3, 1849 in Baltimore when he was supposed to be in Philadelphia conducting some business, and then died four days later in the Washington College Hospital:
Poe never made it to Philadelphia to attend to his editing business. Nor did he ever make it back to New York, where he had been living, to escort his aunt back to Richmond for his impending wedding. Poe was never to leave Baltimore, where he launched his career in the early 19th- century, again—and in the four days between Walker finding Poe outside the public house and Poe's death on October 7, he never regained enough consciousness to explain how he had come to be found, in soiled clothes not his own, incoherent on the streets. Instead, Poe spent his final days wavering between fits of delirium, gripped by visual hallucinations. The night before his death, according to his attending physician Dr. John J. Moran, Poe repeatedly called out for "Reynolds"—a figure who, to this day, remains a mystery.

Poe's death—shrouded in mystery—seems ripped directly from the pages of one of his own works. He had spent years crafting a careful image of a man inspired by adventure and fascinated with enigmas—a poet, a detective, an author, a world traveler who fought in the Greek War of Independence and was held prisoner in Russia. But though his death certificate listed the cause of death as phrenitis, or swelling of the brain, the mysterious circumstances surrounding his death have led many to speculate about the true cause of Poe's demise. "Maybe it’s fitting that since he invented the detective story," says Chris Semtner, curator of the Poe Museum in Richmond, Virginia, "he left us with a real-life mystery."

The rest of the article proposes different causes of death.
What connects these two events is a poem to Our Lady, written by Poe in the manuscript of one of his strange tales, but not included in the published version of Morella:
Sancta Maria! turn thine eyes -
Upon the sinner's sacrifice,
Of fervent prayer and humble love,
From thy holy throne above.
At morn - at noon - at twilight dim -*
Maria! thou hast heard my hymn!
In joy and wo# - in good and ill -
Mother of God, be with me still!
When the Hours flew brightly by,
And not a cloud obscured the sky,
My soul, lest it should truant be,
Thy grace did guide to thine and thee;
Now, when storms of Fate o'ercast
Darkly my Present and my Past,
Let my Future radiant shine
With sweet hopes of thee and thine!
*Suggesting the recitation of the Angelus at 6:00 a.m., Noon, and 6:00 p.m.
#as spelled in the manuscript 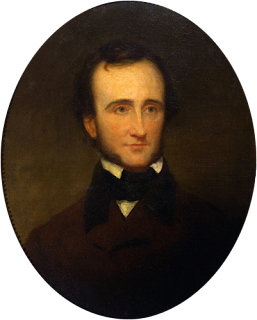 The story is a strange tale like Ligeia or Berenice and has nothing to do with Catholic teaching about death, the resurrection of the body or eternal life. In the context of the story, it's almost eerie that the title character Morella, who predicts her death and her strange reincarnation as her own daughter, sings this "Catholic hymn" with fervor. Nevertheless, Poe knew something about Catholic teaching about and devotion to the Mother of God, using that title, referencing the thrice daily prayers, and Mary as Queen of Heaven and Earth on a throne in heaven.
The Edgar Allen Poe Society of Baltimore provides this essay exploring Poe's knowledge of Catholicism, suggesting that he had many Catholic literary contacts (in Baltimore that makes lots of sense!). Michael L. Burdick comments on this hymn to Mary in the context of this story trying to fit it in to the pattern of the three traditional mysteries of the Rosary (Joyful, Sorrowful, and Glorious):
“Morella,” in effect, sets the stage as the first tale in Poe’s woman-oriented trilogy of the transmigration of souls. Perhaps the work might best be understood in terms of Poe’s familiarity with the Joyful Mysteries. Yes, there are elements of terror present in the story, but we must recall that unlike “Ligeia,” “Morella” presents the transmigratory act in relation to a most natural process — childbirth.(25) The beautiful young woman in the tale manages to cheat death by giving birth to a daughter, through whom she manages, in a sense, to remain alive. Morella’s name derives from that of the famous Venerable Mother Juliana Morell, a sixteenth-century Catholic nun known for her intelligence and purity. She resembles the Virgin Mary in the sense that she too realizes that the pangs of childbirth and the attendant necessities of raising a child become necessary to ensure the physical and spiritual survival of life.

One of the key elements in justifying this view rests upon the poem Poe included in most of the published versions of “Morella.” The “Catholic Hymn” in the tale makes clear Poe’s knowledge of the Church’s tradition concerning Mary. Its presence suggests to me that Poe might have spent time examining the various doctrines focusing on the Virgin Mary. Poe’s interest seems all the more likely when we realize that many of the official pronouncements issued by the American Catholic Church during the 1820s, 30s, and 40s deal with the increasingly important position of Mary in Catholic belief and ritual. Morella pleads: “Mother of God! Be with me still . . . / My soul — lest it should truant be — / Thy love did guide to shine and thee” (M2:228), thereby acknowledging Mary’s pivotal role in salvation. As Mabbott illustrates, the poem echoes the Catholic prayer the “Hail Mary.”(26) Many a Catholic has asked the Virgin to intercede on his or her behalf, and Morella seems to be following the same path. Almost immediately following this poem/prayer, Morella informs her husband: “I am dying yet shall I live. Therefore for me, Morella, thy wife, hath the charnel-house no terror — mark me not even the terrors of the worm” (M2:228). Again, we need to wonder if Poe (in terms of one of the central concepts expressed in the Glorious Mysteries) is trying to remind his readers of the Blessed Virgin, who through her Assumption into Heaven was spared the decay of the grave.
The poem on its own expresses some beauty and piety, but I'm not convinced by Burdick's analysis. Gothic literature, from Alcott to Poe in the USA displayed some fascination with Catholicism--it's part of the genre.
Our Lady of the Rosary, pray for us!
Edgar Allen Poe, rest in peace.
Image Credit: The Battle of Lepanto by Paolo Veronese (public domain)
Image Credit: 1845 portrait of Poe by Samuel Stillman Osgood (public domain)
Posted by Stephanie A. Mann at 12:00 AM