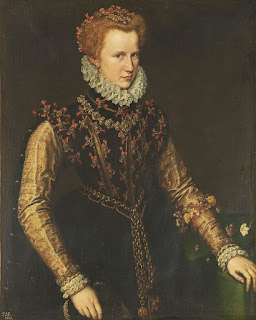 Jane Dormer, the future Duchess of Feria, was born on Sunday, January 6, 1538. Her early biographer, Henry Clifford, noted the significance of the date:

Jane Dormer was born at Eythrope, not far from Aylesbury in the County of Buckingham, in her grandfather's house, on the 6th of January, the year of our Lord 1538, being Sunday, and the Feast of the Epiphany; therein presaging the virtues of her after life by coming into the world, when Christians were rejoicing in the birth of our Lord. In her baptism the name of Jane was given to her after her grandmother; and this name signifying grace, how well it did befit her will appear in her life. When she began to speak and discern and learn her duty, her natural inclinations might easily be seen. She was apt, very disciplinable, obedient, humble, awful, generous in her condition; so that she seemed a child only in years. She was much beloved by the servants and gentlewomen, that were in her grandmother's house, (for there were many of noble descent, commended by their parents, to learn good education and virtue in that house), all presaging, that so sweet conditions, in so tender years and so graceful a countenance, gave hope to produce answerable effects.

Note that "Jane" is a derivative of "John" meaning "God is gracious", so that's the reference Clifford makes to "this name signifying grace". By the beginning of 1538, Henry VIII's reformation of the Church in England was well underway with many of the monasteries being dissolved, shrines being destroyed; the Ten Articles, the Bishop's Book and other methods of determining what the new Church of England believed and taught, were developed: and Father Sebastian Newdigate, a Carthusian monk who had served at Henry VIII's court, had been hanged, drawn, and quartered at Tyburn (on June 19, 1535).

The reason that last fact is important is the Sebastian Newdigate was Jane's grandmother's brother. Jane's grandmother was also named Jane and raised Jane until she went to Court. According to the 1888 Dictionary of National Biography:

In her early years she was the playfellow of Edward VI, whose tutor, Jane's maternal grandfather, would constantly send for her to read, play, dance, and sing with his pupil. Between Jane and Mary there sprang up a strong friendship, which continued unimpaired until the latter's death. They were inseparable companions, and often shared the same bedchamber; during the two months of Mary's last illness Jane Dormer was ever at her bedside, and it was into her hands that the dying queen committed her jewels to be handed over to Elizabeth. When Philip II came to England to marry Mary, he was accompanied by Don Gomez Suarez de Figueroa of Cordova, count of Feria, between whom and the queen's favourite maid of honour arose the attachment which led to their ultimate union. Jane's remarkable beauty and the sweetness of her disposition caused her hand to be sought in marriage by several English noblemen, among whom were Edward Courtenay, earl of Devonshire, the Duke of Norfolk, and the Earl of Nottingham, but by Mary's advice they were one and all rejected in favour of the Spaniard.

Jane married the Count of Feria after Mary I died and then they left England for Spain, recognizing that Elizabeth  was not going to continue Mary's religious policies:

But before Philip was ready to return, Mary died, and Jane Dormer went back to her grandmother, now lodging in the Savoy. The Count of Feria, who was in England at the time, having been sent by Philip when he heard of the queen's sickness, strongly urged an immediate union, and accordingly the marriage took place on 29 Dec. 1558. The reason for this haste was the count's anticipation that the catholic supremacy was now at an end, and that consequently his stay in England would not be long. His fears were justified, and on learning that Elizabeth's coronation ceremony would not be in strict accordance with catholic usage, he refused, notwithstanding the queen's personal entreaty, to be present on the occasion, and at Philip's command prepared to leave the country. After arranging for his wife to follow him, he set out for Flanders in May 1559. At his wife's suggestion he obtained leave of the queen, in face of much opposition, to take with him the members of certain religious orders, including the Carthusian monks of Sheen, the nuns of St. Bridget of Sion, and the Dominican nuns of Dartford. The Countess of Feria remained at Durham House till the end of July, when Don Juan de Ayala arrived to escort her to Flanders. After a fare well interview with Elizabeth, who is variously stated by catholic and protestant writers respectively to have rudely slighted her and to have received her with marked affection, she started on her way to the continent, accompanied by her paternal grandmother, Alvara de Quadra, bishop of Aquila, and six attendant gentlewomen, among whom were included Lady Margaret Harrington, a sister of Sir William Pickering, Mrs. Paston, and Mrs. Clarentia, the favourite waiting-woman of Queen Mary. The journey was a triumphal progress.

Her biographer in the DNB, Alsager Richard Vian, pays tribute to her power and influence in Spain:

The duchess had the stronger character of the two, and her husband, in his will, left her sole guardian of their son and manager of his estates. At the time of his death he was in debt to the extent of three hundred thousand ducats, the whole of which she had cleared off before her son came of age and entered into possession of his estates. As a widow she continued to further the papal cause with unexampled zeal. More than once spies were dispatched from England to Spain to gain some insight into her supposed intrigues with the catholic church. At least four popes—Gregory XIII, Sixtus V, Clement VIII, and Paul V—personally corresponded with her. All Catholics who came to Spain from England received a welcome at her house, and were provided according to their needs with food, clothes, or money. She used all her influence at court to procure the release of such fugitives as were imprisoned on their arrival; on one occasion she obtained freedom for thirty-eight Englishmen imprisoned at Seville, and among others who owed their release to her intercession was Sir Richard Hawkins. In all matters the piety of the Duchess of Feria took a practical form. She took the habit of the third order of St. Francis, and wore it and the scapulary as long as she lived. Every week, and sometimes oftener, she supplied a supper to a monastery of this same order, of which both she and her husband, while he lived, were generous patrons.

She sounds like a most formidable woman! It's rather amazing there's no modern biography of her.

Duchess of Feria died on January 13, 1612 (on the feast of the Baptism of the Lord!) and was buried in the Convent of St. Clare in Zafra, Spain, which is now a museum.

Image Credit: a portrait believed to be of Jane Dormer, the Duchess of Feria, by Sir Anthonis Mor.
Posted by Stephanie A. Mann at 12:00 AM