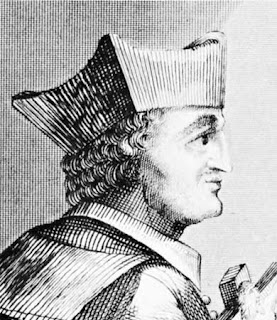 Father Edward Petre, SJ was an adviser to King James II. According to the Dictionary of National Biography he was a victim of the Popish Plot but survived:

the second son of Sir Francis Petre, bart., of the Cranham branch of the family, of which the Barons Petre constituted the eldest branch. His mother was Elizabeth, third daughter of Sir John Gage, bart., of Firle Place, Sussex, and grandson of Sir John Gage [q. v.], constable of the Tower under Henry VIII. The story told in ‘Revolution Politicks,’ implying that he was educated at Westminster under Busby, is apocryphal. His family being devout Roman catholics (sic), he was sent in 1649 to study at St. Omer, and three years later he entered the Society of Jesus at Watten, under the name of Spencer, though he was not professed of the four vows until 2 Feb. 1671. He obtained some prominence in the society, not so much for learning as for boldness and address. On the death of his elder brother Frances, at Cranham in Essex, about 1679, he succeeded to the title, and about the same time he received orders from his provincial, and was sent on the English mission. Being rector of the Hampshire district at the time of the popish plot (1679), he was arrested and committed to Newgate; but, as Oates and his satellites produced no specific charges against him, he was released, after a year's confinement, in June 1680. In the following August he became rector of the London district and vice-provincial of England; and, intelligence of this appointment having leaked out, he was promptly rearrested and imprisoned until 6 Feb. 1683. Exactly two years after his liberation James II ascended the throne, and at once summoned Petre to court.

James wanted Father Petre to have a high position in the Catholic Church to serve him, but Pope Innocent XI did not cooperate:

James recognised in him ‘a resolute and undertaking man,’ and resolved to assign him an official place among his advisers. As a preliminary step, it was determined to seek some preferment for him from Innocent XI. In December 1686 Roger Palmer, earl of Castlemaine [q. v.], was sent to Rome to petition the pope to this effect. The first proposal apparently was that the pope should grant Petre a dispensation which would enable him to accept high office in the English church, and Eachard states that the dignity ultimately designed for Petre was the archbishopric of York, a see which was left vacant (from April 1686 to November 1688) for this purpose. The pope, however, who had little fondness for the Jesuits, proved obdurate, both to the original request and to the subsequent proposal which Sunderland had the effrontery to make, that Petre should be made a cardinal. Innocent professed himself utterly unable to comply ‘salva conscientia,’ and added that ‘such a promotion would very much reflect upon his majesty's fame’ (see abstract of the correspondence in Dodd's Church Hist. iii. 424–5; D'Adda Correspondence in Addit. MS. 15396). He shortly afterwards ordered the general of the Jesuits to rebuke Petre for his ambition.

He barely escaped the fall of King James II and the invasion of the William of Orange:

The night before the king's departure he slept at St. James's, whence, making his exit next day by a secret passage, he escaped to Dover in disguise, and succeeded in reaching France before his master. He never saw James again. His rooms at Whitehall were occupied by Jeffreys for a short time after his flight; when Jeffreys himself decamped to Wapping, they were broken into by a protestant mob (cf. Twelve Bad Men, ed. Seccombe, p. 92). Petre spent the next year quietly at St. Omer, unheeding the torrent of abusive pamphlets and broadsides with which he was assailed. In December 1689 he was at Rome, but ‘not much lookt on there’ (Luttrell, i. 616). In 1693 he was appointed rector of the college at St. Omer, where the enlightened attention that he paid to the health and cleanliness of the community made him highly valued (Oliver, Collections). In 1697 he was sent to Watten, where he died on 15 May 1699.

As this blog points out, we don't have a reliable portrait of Father Petre; the images we have of him are all caricatures, salacious and suggestive.

The Catholic Encyclopedia reminds us that we have no evidence that Father Petre did anything immoral and that, among his famous recusant family he

fills more space in history than any of his family, owing to the multiplicity of attacks made upon him as a chaplain and adviser of James II. Petre's unpopularity as a Jesuit was so great that it harmed the king's cause; but if we regard his conduct by itself, no serious fault has yet been proved against him. If we cannot yet confidently acquit him of all blame, that is chiefly because first-hand evidence is very deficient; but the nearer we get to first-hand evidence, the better does Petre's conduct appear. Before James's accession (6 Feb., 1685) he had shown good, but not extraordinary virtue and ability, and was then vice-provincial of his order. . . .

Setting aside prejudiced witnesses (and it will be remembered that there was a party against him, even among Catholics), and studying those in sympathy with the Jesuit, we seem to perceive in him a steadfast, kind-hearted English priest, devoting himself with energy to the opportunities for spiritual good that opened out before him. With little gift for politics, nor paying much heed to them, he was nevertheless severely blamed when things went wrong. He was also regardless, almost callous, as to what was said about him by friend or foe.

Eternal rest grant unto him, O Lord, and let perpetual light shine upon him. Amen.