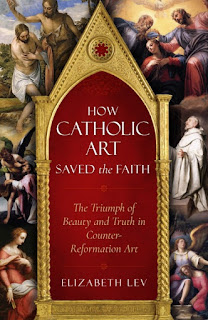 According to the publisher, Sophia Institute Press:

Not long after Martin Luther’s defiance of the Church in 1517, dialogue between Protestants and Catholics broke down, brother turned against brother, and devastating religious wars erupted across Europe. Desperate to restore the peace and recover the unity of Faith, Catholic theologians clarified and reaffirmed Catholic doctrines, but turned as well to another form of evangelization: the Arts.

Convinced that to win over the unlettered, the best place to fight heresy was not in the streets but in stone and on canvas, they enlisted the century’s best artists to create a glorious wave of beautiful works of sacred art — Catholic works of sacred art — to draw people together instead of driving them apart.

How Catholic Art Saved the Faith tells the story of the creation and successes of this vibrant, visual-arts SWAT team whose war cry could have been “art for Faith’s sake!” Over the years, it included Michelangelo, of course, and, among other great artists, the edgy Caravaggio, the graceful Guido Reni, the technically perfect Annibale Carracci, the colorful Barocci, the theatrical Bernini, and the passionate Artemisia Gentileschi. Each of these creative souls, despite their own interior struggles, was a key player in this magnificent, generations-long project: the affirmation through beauty of the teachings of the Holy Catholic Church.

Here you will meet the fascinating artists who formed this cadre’s core. You will revel in scores of their full-color paintings. And you will profit from the lucid explanations of their lovely creations: works that over the centuries have touched the hearts and deepened the faith of millions of pilgrims who have made their way to the Eternal City to gaze upon them.

Join those pilgrims now in an encounter with the magnificent artworks of the Catholic Restoration — artworks which from their conception were intended to delight, teach, and inspire. As they have done for the faith of so many, so will they do for you.

The language in the blurb ("this vibrant, visual-arts SWAT team whose war cry could have been "art for Faith's sake!"'; "the affirmation through beauty of the teachings of the Holy Catholic Church"; "lucid explanations of their lovely creations";) is matched by Lev's writing style: bold, almost strident in describing the theological differences between Protestant and Catholic teaching, insightful expression of the Church teaching defended in the individual artworks; cogent analysis of how each artist succeeded in technique, adaptation of the tradition, and creativity. 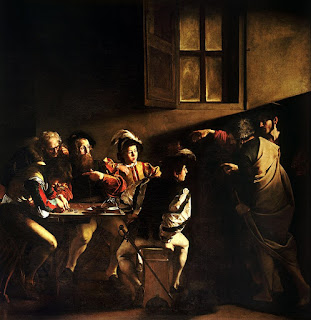 She is rather dismissive of medieval art and architecture insofar as the Gothic did not suit the new challenges to Catholic teaching: she rejects the rood screen for example because it blocked the view of the Altar--during the Middle Ages the Eucharist was usually reserved in a pyx not a Tabernacle-- and contrasts the static "sacred conversations" of Jesus, Mary, certain saints, and the donors of the work on the side with the dramatic, even emotional depictions of pilgrims and laity before the Blessed Virgin Mary (Caravaggio's Our Lady of Loreto or Our Lady of the Rosary)--and she rejects vehemently the idea that Jesus is pointing to the younger man counting the money in Caravaggio's Call of St. Matthew!

The first two parts of the book, "The Sacraments" and "Intercession" are the most successful demonstration of the premise of the book: that the images and architecture of Counter-Reformation Rome, starting with the reign of Pope Sixtus V helped the Church defend and revive the doctrines and religious devotions codified at the Council of Trent. The Real Presence, the Sacrament of Penance, Holy Orders, Baptism, the Communion of Saints, the Blessed Virgin Mary, prayer for the Poor Souls in Purgatory, miracles, repentance, etc: Lev matches the restated doctrine to certain paintings exactly.

The third part, "Cooperation" did not explore the thesis of how Catholic Art Saved the Faith but how the Church continued our mission to preach the Gospel to the whole world. The hall of maps and Bernini's Fountain of the Four Rivers are at a remove from the work of the Church in the later sixteenth and early seventeenth century. The chapter on "Faith and Empiricism" also deviates from the thesis as Lev explores the relationship between faith and reason; the Church and science. I don't think she clarified effectively the difference between Aristotelian/Scholastic Empiricism and the modern Empiricism of Locke and Hume.

The later chapters, on the martyrs, the dignity of women, and the war on sin get back on track, and Lev ends her analysis of faith and art with a discussion of Michelangelo's Last Judgement in the Sistine Chapel. She also provides some good hints for making great Catholic art part of our lives; brief biographies of the major artists, photo credits, and a bibliography. 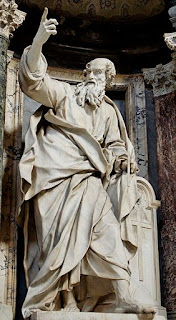 The blurb highlights the many color plates: most of them are excellent, but a few are low resolution and rather grainy. At least once--when discussing the statue of St. Thomas the Apostle by le Gros in St. John Lateran--no image accompanies the text. (Image Credit)

I mentioned re-reading a chapter from Sir Kenneth Clark's Civilisation, earlier this week. As soon as I started reading this book I remembered Clark's chapter and episode on the Catholic Counter Reformation in Rome through art and architecture. He outlines the same thesis:

The leaders of the Catholic Reformation had made the inspired decision not to go half-way to meet Protestantism in any of its objections, but rather to glory in those very doctrines that the Protestants had most forcibly, and sometimes, it must be admitted, most logically, repudiated. Luther than repudiated the authority of the Pope: very well, no pains must be spared in making a giant assertion that St. Peter, the first bishop of Rome, had been divinely appointed as Christ's Vicar on Earth. Ever since Erasmus, intelligent men in the north had spoken scornfully of relics: very well, their importance must be magnified . . . The veneration of relics was connected with the cult of the saints and this had been equally condemned by the reformers. Very well, the saints should be made more insistently real to the imagination and in particular their sufferings and their ecstasies should be vividly recorded.

In all these ways the Church gave imaginative expression to deep-seated human impulses. . . . (pp. 177-178)

Lev displays none of the diffidence that Clark did about this program of seventeenth century "new evangelization" re-asserting Catholic doctrine and worship to the citizens of Rome, pilgrims, and other visitors. (Kenneth Clark explains some of that diffidence by referring to his English education which denigrated the recovery of the Catholic Church after the Reformation as depending on "the Inquisition, the Index and the Society of Jesus"-- p. 175.) Nevertheless, his prior testimony supports her assertion that the art and architecture of Catholic Reformation Rome "saved the faith" among confused and distracted Catholics after the divisions of the Protestant Reformation. And remember that Kenneth Clark became a Catholic on his deathbed!

This book deserves to be on the bookshelf next to Thomas E. Wood Jr.'s How the Catholic Church Built Western Civilization and other historical, cultural apologetics like Rodney Stark's Bearing False Witness.

Please note that I purchased the book.
Posted by Stephanie A. Mann at 12:30 AM