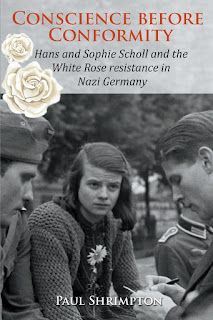 Sophie Scholl, White Rose objector to Nazi rule in Germany, and her brother Hans were guillotined on February 22, 1943. Scholl is one of the most admired women in 20th Century German history because she and her brother, with a few others at the University of Munich, tried to persuade the German people to reject that Nazi rule by publishing pamphlets and distributing them widely.

As Paul Shrimpton explains in a 2018 article in the UK's Catholic Herald, Blessed John Henry Newman's teachings on conscience inspired Sophie and The White Rise group because of Theodor Haecker's translations:

The man who brought Newman’s writings to the attention of the Munich students was the philosopher and cultural historian Theodor Haecker. Haecker had become a Catholic after translating Newman’s Grammar of Assent in 1921, and for the rest of his life Newman was his guiding star. He translated seven of Newman’s works, and on several occasions read excerpts from them at the illegal secret meetings Hans Scholl convened for his friends. Strange though it may seem, the insights of the Oxford academic were ideally suited to help these students make sense of the catastrophe they were living through. . . .

When Sophie’s boyfriend, a Luftwaffe officer called Fritz Hartnagel, was deployed to the Eastern Front in May 1942, Sophie’s parting gift was two volumes of Newman’s sermons. After witnessing the carnage in Russia, Fritz wrote to Sophie to say that reading Newman’s words in such an awful place was like tasting “drops of precious wine”.

In another letter, Fritz wrote: “We know by whom we were created, and that we stand in a relationship of moral obligation to our creator. Conscience gives us the capacity to distinguish between good and evil.” These words were taken almost verbatim from a famous sermon of Newman’s called “The Testimony of Conscience”. In it, Newman explains that conscience is an echo of the voice of God enlightening each person to moral truth in specific situations. All of us, he argues, have a duty to obey a right conscience over and above all other considerations.

At the White Rose trial, Sophie said that it was her Christian conscience that had compelled her to oppose the Nazi regime non-violently. The same was true for Hans: he, like his sister, had found in Newman and other Christian writers the resources and inspiration to make sense of the brutal and demonic world around him. 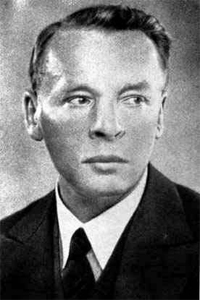 More on Haecker here. He also translated Newman's Development of Christian Doctrine, Historical Sketches, and The Dream of Gerontius! (Edith Stein, St. Teresa Benedicta of the Cross, translated The Idea of a University.) More about Newman's influence among Catholics in 1920's Germany here.

Sophie and Hans wanted to follow Haecker, Newman, and their White Rose partner Christoph Probst into the Catholic Church right before their executions, but were persuaded not to because of how it would have affected their mother, a devout Lutheran lay preacher!

In 1990, Joseph Cardinal Ratzinger explained how he had been inspired by Newman's thoughts on conscience after the Nazi regime had been destroyed:

In January 1946, when I began my study of theology in the Seminary in Freising which had finally reopened after the confusion of the war, an older student was assigned as prefect to our group, who had begun to work on a dissertation on Newman's theology of conscience, even before the beginning of the war. In all the years of his military service he had not lost sight of this theme, which he now turned to with new enthusiasm and energy.

We were soon bonded by a personal friendship, wholly centred on the great problems of philosophy and theology. Of course, Newman was always present. Alfred Läpple— the name of the abovementioned prefect — published his dissertation in 1952 with the title: Der Einzelne in der Kirche (The Individual in the Church).

For us at that time, Newman's teaching on conscience became an important foundation for theological personalism, which was drawing us all in its sway. Our image of the human being as well as our image of the Church was permeated by this point of departure.

We had experienced the claim of a totalitarian party, which understood itself as the fulfilment of history and which negated the conscience of the individual. One of its leaders had said: "I have no conscience. My conscience is Adolf Hitler". The appalling devastation of humanity that followed was before our eyes.

So it was liberating and essential for us to know that the "we" of the Church does not rest on a cancellation of conscience, but that, exactly the opposite, it can only develop from conscience.

Precisely because Newman interpreted the existence of the human being from conscience, that is, from the relationship between God and the soul, was it clear that this personalism is not individualism, and that being bound by conscience does not mean being free to make random choices — the exact opposite is the case.

I wonder if Sophie, Hans, and Christoph realized they were being executed--born into eternal life--the day after their guide to conscience John Henry Newman's birthday 142 years earlier?
Posted by Stephanie A. Mann at 12:30 AM