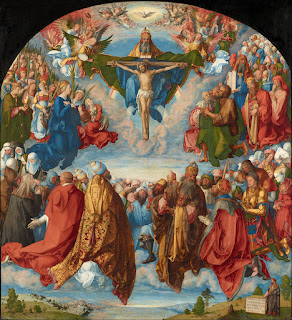 After the two segments on his life last month, we are going to focus on several themes in Newman works, starting with God and Doctrine. In Newman's life and works, we see that for him belief in God meant acceptance of Revelation, the Creeds, and Doctrine.

In other words, the dogma lived loudly within him!

His understanding of that Doctrine developed and changed (he was a Calvinist but finally rejected that teaching), and once he became a Catholic, he accepted the Church's teachings on that Doctrine without reserve (see below).

In the first chapter of his Apologia pro vita sua, Blessed John Henry Newman describes his early journey of faith in God and His Revelation (the doctrines and dogma of the Christian faith). He was raised in a low Church of England family (his mother had Huguenot forebears), he knew his Anglican Catechism, and he read the Holy Bible. When he was 15, he experienced a religious conversion because of the influence of the Reverend Walter Mayers and Calvinism:

When I was fifteen, (in the autumn of 1816,) a great change of thought took place in me. I fell under the influences of a definite Creed, and received into my intellect impressions of dogma, which, through God's mercy, have never been effaced or obscured. Above and beyond the conversations and sermons of the excellent man, long dead, the Rev. Walter Mayers, of Pembroke College, Oxford, who was the human means of this beginning of divine faith in me, was the effect of the books which he put into my hands, all of the school of Calvin. One of the first books I read was a work of Romaine's; I neither recollect the title nor the contents, except one doctrine, which of course I do not include among those which I believe to have come from a divine source, viz. the doctrine of final perseverance. I received it at once, and believed that the inward conversion of which I was conscious, (and of which I still am more certain than that I have hands and feet,) would last into the next life, and that I was elected to eternal glory. I have no consciousness that this belief had any tendency whatever to lead me to be careless about pleasing God. I retained it till the age of twenty-one, when it gradually faded away; but I believe that it had some influence on my opinions, in the direction of those childish imaginations which I have already mentioned, viz. in isolating me from the objects which surrounded me, in confirming me in my mistrust of the reality of material phenomena, and making me rest in the thought of two and two only absolute and luminously self-evident beings, myself and my Creator;—for while I considered myself predestined to salvation, my mind did not dwell upon others, as fancying them simply passed over, not predestined to eternal death. I only thought of the mercy to myself.

Then he read the works of Thomas Scott of Aston Sandford. From them he, having started to fall away from Calvinist doctrines, learned about the search for truth and the doctrine of the Holy Trinity:

What, I suppose, will strike any reader of Scott's history and writings, is his bold unworldliness and vigorous independence of mind. He followed truth wherever it led him, beginning with Unitarianism, and ending in a zealous faith in the Holy Trinity. It was he who first planted deep in my mind that fundamental truth of religion. With the assistance of Scott's Essays, and the admirable work of Jones of Nayland, I made a collection of Scripture texts in proof of the doctrine, with remarks (I think) of my own upon them, before I was sixteen; and a few months later I drew up a series of texts in support of each verse of the Athanasian Creed. These papers I have still.

Besides his unworldliness, what I also admired in Scott was his resolute opposition to Antinomianism, and the minutely practical character of his writings. They show him to be a true Englishman, and I deeply felt his influence; and for years I used almost as proverbs what I considered to be the scope and issue of his doctrine, Holiness rather than peace, and Growth the only evidence of life.

Antinomianism is the belief that the chosen elect do not even have to follow the Ten Commandments: they are saved and no morality applies to them; no sin can affect their election and certainty of Heaven.

Newman also described two more influences: one that would remain throughout his life; the other he would reject: Church History (and the Fathers of the Church) and Anti-Catholicism:

Now I come to two other works, which produced a deep impression on me in the same Autumn of 1816, when I was fifteen years old, each contrary to each, and planting in me the seeds of an intellectual inconsistency which disabled me for a long course of years. I read Joseph Milner's Church History, and was nothing short of enamoured of the long extracts from St. Augustine, St. Ambrose, and the other Fathers which I found there. I read them as being the religion of the primitive Christians: but simultaneously with Milner I read Newton On the Prophecies, and in consequence became most firmly convinced that the Pope was the Antichrist predicted by Daniel, St. Paul, and St. John. My imagination was stained by the effects of this doctrine up to the year 1843; it had been obliterated from my reason and judgment at an earlier date; but the thought remained upon me as a sort of false conscience.

At each step of Newman's description of the influence of various men and books in this survey of the history of his religious opinions from about 1816 to 1833, he emphasizes the doctrine he learned: the Holy Trinity, Calvinist TULIP, Eternal Life in Heaven or in Hell, etc. He accepted other doctrines while at the University of Oxford before 1833: Baptismal regeneration (the end of his Calvinist phase); the Anglican doctrine of Tradition ("that the sacred text [of the Holy Bible] was never intended to teach doctrine, but only to prove it, and that, if we would learn doctrine, we must have recourse to the formularies of the Church; for instance to the Catechism, and to the Creeds"); apostolic succession; the Christian Church "as a substantive body or corporation"; the Real Presence in the Eucharist, etc.

In chapters two through four of the Apologia pro vita sua, Newman traces the further development of his religious ideas as he tries to develop the Via Media of the Anglican Church. But in chapter five he begins with this statement:

FROM the time that I became a Catholic, of course I have no further history of my religious opinions to narrate. In saying this, I do not mean to say that my mind has been idle, or that I have given up thinking on theological subjects; but that I have had no variations to record, and have had no anxiety of heart whatever. I have been in perfect peace and contentment; I never have had one doubt. I was not conscious to myself, on my conversion, of any change, intellectual or moral, wrought in my mind. I was not conscious of firmer faith in the fundamental truths of Revelation, or of more self-command; I had not more fervour; but it was like coming into port after a rough sea; and my happiness on that score remains to this day without interruption.

Image Credit: Adoration of the Holy Trinity by Albrecht Durer.
Posted by Stephanie A. Mann at 12:30 AM