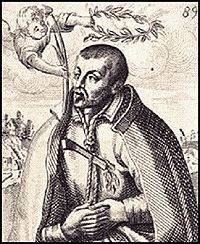 What a remarkable doctrine of the Church is the Communion of Saints! Two great holy men were born this day--one to eternal life, the other to life on earth: St. Robert Southwell was executed on February 21, 1595 and Blessed John Henry Newman was born on February 21, 1801.St. Robert Southwell was 33 years old when he was executed at Tyburn on February 21, 1595. When he cited his age during his trial, his torturer Richard Topcliffe mocked him for claiming equality with Jesus Christ. Southwell answered that he was but a worm.It is hard to be temperate when writing about his arrest, torture and execution--it is obviously a horrendous blot against the Elizabethan "regime". He was betrayed by a woman that Elizabeth's pursuivant Richard Topcliffe had raped and blackmailed--he promised to find her a husband since she was pregnant with his child if she would turn Southwell in; he was tortured--illegally and excruciatingly--numerous times, starting with a visit to Topcliffe's personal torture chamber, while Elizabeth's officials looked on; then he was held in fetid conditions until his father visited him in Westminster's gatehouse and petitioned the queen to put him to death rather than leave him there, in his own filth.Moved to the Tower of London he was held in greater but solitary comfort, but Queen Elizabeth allowed the sadistic Topcliffe to continue torturing Southwell, who had readily admitted his priesthood. Prior to his trial on February 20 he was moved into a hole called Limbo; the government did not even try to implicate him in any plot against the Queen; he was executed just because he was a Catholic priest. When he was executed on February 21st, the crowds made sure he was dead before the butchery began--and no one cheered when his severed head was displayed to the crowd. Indeed, Elizabeth's government recognized that they had gone too far--there was lull in executions of Catholic priests in London. Lord Cecil even ignored Topcliffe's desires to get started on new victims.Robert Southwell was canonized by Pope Paul VI among the group called The Forty Martyrs of England and Wales. In addition to be a great saint and steadfast martyr, he is regarded as one of the great poets of the Elizabethan Age. Some of his poetry was written while he was held in solitary confinement in the Tower of London and was published posthumously. 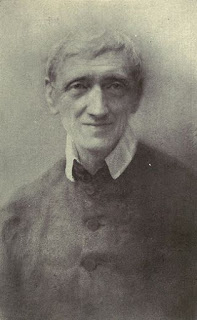 Pope St. John Paul II remembered the 200th anniversary of Newman's birth in this 2001 letter to Birmingham:
Newman was born in troubled times which knew not only political and military upheaval but also turbulence of soul. Old certitudes were shaken, and believers were faced with the threat of rationalism on the one hand and fideism on the other. Rationalism brought with it a rejection of both authority and transcendence, while fideism turned from the challenges of history and the tasks of this world to a distorted dependence upon authority and the supernatural. In such a world, Newman came eventually to a remarkable synthesis of faith and reason which were for him "like two wings on which the human spirit rises to the contemplation of the truth" (Fides et Ratio,Introduction; cf. ibid., 74). It was the passionate contemplation of truth which also led him to a liberating acceptance of the authority which has its roots in Christ, and to the sense of the supernatural which opens the human mind and heart to the full range of possibilities revealed in Christ. "Lead kindly light amid the encircling gloom, lead Thou me on", Newman wrote in "The Pillar of the Cloud"; and for him Christ was the light at the heart of every kind of darkness. For his tomb he chose the inscription: Ex umbris et imaginibus in veritatem; and it was clear at the end of his life’s journey that Christ was the truth he had found.

But Newman’s search was shot through with pain. Once he had come to that unshakeable sense of the mission entrusted to him by God, he declared: "Therefore, I will trust Him... If I am in sickness, my sickness may serve Him, in perplexity, my perplexity may serve Him... He does nothing in vain... He may take away my friends. He may throw me among strangers. He may make me feel desolate, make my spirits sink, hide the future from me. Still, He knows what He is about" (Meditations and Devotions). All these trials he knew in his life; but rather than diminish or destroy him they paradoxically strengthened his faith in the God who had called him, and confirmed him in the conviction that God "does nothing in vain". In the end, therefore, what shines forth in Newman is the mystery of the Lord’s Cross: this was the heart of his mission, the absolute truth which he contemplated, the "kindly light" which led him on.

Other than the glory they now share in Heaven, Southwell and Newman do have some other things in common:

~They are both Englishmen, born, as Pope St. John Paul II said, "in troubled times"~Both are converts to the Catholic faith from the Church of England~Both went to the Continent to study for the priesthood
~Both are order priests: Southwell a Jesuit and Newman an Oratorian~Both are poets, although Southwell is probably the greater poet (but Newman's The Dream of Gerontius is a great achievement)

Of course, they differ vastly in their deaths and that marks their different status as saints in heaven: St. Robert Southwell was canonized as a martyr, while Newman was beatified--and perhaps soon will be canonized--as a confessor of the faith. Here's an article I wrote describing the differences between martyrs and confessors.