The Earl of Essex and the Gunpowder Plot 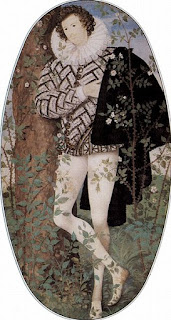 The latter years of Elizabeth I's reign were the scene of a great conflict between her last favourite, Robert Devereux, the Earl of Essex and her principal secretary William Cecil, Baron Burghley, ending in the former's execution on February 25, 1601.

Essex rose quickly at Court after the death of Elizabeth's long-time favourite, his step-father, Robert Dudley, the Earl of Leicester. He was about 21; she was in her early 50s. She granted him many honors and he disobeyed her direct orders many times, but it was his unfortunate performance in Ireland that got him in such trouble that he dared plot against his mentor.

He went to Ireland as Lord Lieutenant, charged with putting down the revolt of the Catholic Lords of Ulster in 1599. Essex did not lead his 16,000 forces very well, and seemed more bent on developing his personal popularity by knighting many soldiers. He negotiated a truce with Hugh O'Neill, the Earl of Tyrone with unfavorable terms for England. Hearing that the Queen was displeased with him Essex left his post and returned to England to make sure she heard his side of the story. He ended up in house arrest for a time and was stripped of his Court offices.

Once he was released, he hoped to be back in her good graces. Because he could not regain one of the lucrative monopolies he had formerly held, Essex panicked and led a poorly designed rebellion against Elizabeth. At his treason trial on February 19, 1601 one of the charges laid against him was that he tolerated religious dissent (i.e. Catholics) but he said that Catholics were making up evidence against him! He was found guilty and sentenced to death.

The Tudor Society provides this description of his execution and his last words:

At just before 8am on the 25th February 1601, Robert Devereux, 2nd Earl of Essex was brought out of the Tower of London and walked to the scaffold. He was wearing a black velvet gown, black satin doublet and breeches and a black hat, which he took off as he climbed up onto the scaffold so that he could bow to the people gathered. He then made a speech acknowledging "with thankfulness to God, that he was justly spewed out of the realm", and said:

My sins are more in number than the hairs on my head. I have bestowed my youth in wantonness, lust and uncleanness; I have been puffed up with pride, vanity and love of this wicked world’s pleasures. For all which, I humbly beseech my Saviour Christ to be a mediator to the eternal Majesty for my pardon, especially for this my last sin, this great, this bloody, this crying, this infectious sin, whereby so many for love of me have been drawn to offend God, to offend their sovereign, to offend the world. I beseech God to forgive it me – most wretched of all.

After praying that God would preserve the Queen and asking the crowd to join him in prayer, he begged God to forgive his enemies. He then removed his gown and ruff and knelt at the block, looking up at the sky and saying the Lord's Prayer. After forgiving the executioner, who knelt in front of him, Essex repeated the Creed and then took off his doublet, as it was covering his neck, to display a waistcoat of scarlet, the colour of martyrs. He laid himself on the block, stretched out his arms and prayed, "Lord be merciful to Thy prostrate servant… Lord, into Thy hands I commend my spirit." After repeating two verses of Psalm 51, he could take no more and cried out, "Executioner, strike home!". The executioner swung his axe to behead Essex, but, unfortunately, it took three blows to sever his neck. When the deed was finally done, the executioner held the head aloft, shouting, "God save the Queen!"

Re: the charges of favouring Catholics (i.e., being lenient with them): One of the Earl's main conspirators was a Catholic, Sir Christopher Blount, who was educated at Louvain by William, later Cardinal, Allen. He had been a member of the Robert Dudley, the Earl of Leicester's household--in spite of Leicester's staunch Calvinism--and he married Leicester's widow, the Earl of Essex's mother, Lettice Knollys Devereux Dudley, aka the Countess of Leicester, the title she kept after marrying Blount. Since Elizabeth I had never been pleased with Leicester and Lettice marrying, since he was HER Favourite, she was not happy that Lettice was happily married again. Blount would be executed on March 18, 1601.

As this website points out, however, there were several other Catholics engaged in the plot:

Amount the handful who supported Essex either openly or covertly were the seven Catholics mentioned here: Robert Catesby, Thomas Winter, John and Christopher Wright, Thomas Percy, John Grant and Francis Tresham. Robert Catesby, even though he had been previously arrested on suspicion in 1596 during an illness of Queen Elizabeth - a stomach complaint at first diagnosed as a catholic attempt to poison her - was imprisoned after being wounded during the short battle at Essex house. He was released later on payment of a fine of £3000. Francis Tresham only escaped a charge of treason by a bribe of £1000 to Lady Catherine Howard. In addition, some payment was probably given to Egerton and the Lieutenant of the Tower, Lord Thomas Howard, before the pardon could be procured. Records of Sir Thomas Tresham indicate the reverberation of Francis' incarceration. He was forced to sell a number of properties in order to come up with the £2000 fine. It has also been questioned whether he assisted in paying some of Robert Catesby's fine also. The others were fined lesser amounted depending on the degree of participation with Essex. 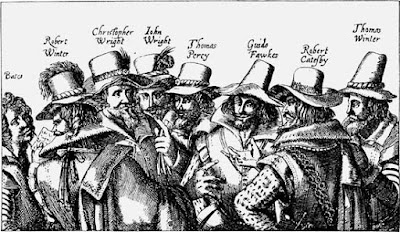 Those seven--and others--would then participate in the Gunpowder Plot at the beginning of James I's reign. Had the Earl of Essex promised them leniency with the Recusant Laws if his coup succeeded?
Posted by Stephanie A. Mann at 12:30 AM

Email ThisBlogThis!Share to TwitterShare to FacebookShare to Pinterest
Labels: Catholics in England, Christopher Blount, Elizabeth and Essex, Elizabeth I, James I, Recusant Laws, Robert Devereux, the Earl of Essex, the Gunpowder Plot