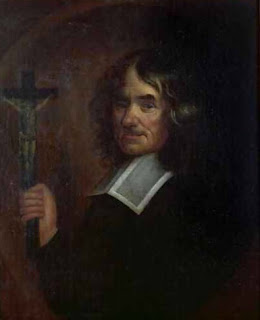 Apologizing that it was taking him so long, Charles II died on February 6, 1685. He had suffered a fit of apoplexy on February 2 (O.S.) and had asked his brother James the Duke of York to take care of his mistresses (no word about his wife?) and certainly "let not poor Nelly starve."
Before he died Charles' brother and his wife Catherine of Braganza arranged to have the priest Father John Huddleston who had saved him in England after the defeat at Worcester come into the Royal Sickroom. The Bishop of Bath, Thomas Ken (future nonjuror) and all the other Anglicans left the room. The line attributed to James was that the priest who had saved his body was there to help save his soul--and Charles II was received into the Catholic Church and received Holy Communion as Viaticum.
Then when the Bishop and other clergy and nobility came back into the room, Charles did not receive Anglican communion. When he was buried at Westminster Abbey on February 14, his funeral ceremonies were rather restrained, possibly by the knowledge that he had "Poped" before he died.
Charles had ruled alone after dissolving Parliament in 1681, the conflict with Parliament, caused at partially (as it had been for his father) by religious matters. After the furor of the Popish Plot he had restored his brother to the position of High Admiral in violation of Parliament's Test Act and he had begun again to rely on France for funds. He might have been heading for another Civil War, but what some have called his love of ease, his laziness, might have pulled him back so he would avoid exile once again. He was not so dedicated to Catholic faith as James, and would have been more politic, just as waiting until at the point of death to convert he delayed his promised conversion.

Father John Huddleston was a Benedictine monk; he was born in Lancashire into a Catholic family and studied at St. Omer's and at the English College in Rome, being ordained in Rome at St. John Lateran in 1637 and returned to England in 1639. The Catholic Encyclopedia explains how he saved the future Charles II:

In 1651 he was residing at Moseley, Staffordshire, as chaplain to the Whitgreave family. After the defeat at Worcester on 3 September, 1651, Charles II was conducted by Colonel Gyfford to Whiteladies, where he was sheltered by the Penderell family, and it was while seeking for some safer hiding place for the king that John Penderell happened to meet Father Huddleston. Accordingly Charles was disguised as a peasant and removed to Moseley during the night of Sunday, 7 September. To guard against surprise Huddleston was constantly in attendance on the king; his three pupils were stationed as sentinels at upper windows and Thomas Whitgreave patrolled the garden. On Tuesday, 9 September, Cromwell's soldiers came to search the house. The king and Huddleston were hurriedly shut away in the priest's hiding place, and the troops, after first seizing Whitgreave as a fugitive cavalier from Worcester, were eventually convinced that he had not left the house for some weeks and were persuaded to depart without searching the mansion. That night the king left for Bentley, after promising to befriend Huddleston when restored to his throne.

While Charles was in exile, Huddleston became a Benedictine. Once Charles II restored the monarchy, Father Huddleston served first the Dowager Queen Henrietta Maria and then Queen Catherine of Braganza. Charles II helped all those who had helped him, protecting them for example, during the Popish Plot crisis:

During the disturbances produced by Titus Oates's pretended revelations the House of Lords, by a vote on 7 December, 1678, ordered that Huddleston, Thomas Whitgreave, the brothers Penderell, and others instrumental in the preservation of his Majesty's person after the battle of Worcester, should for their said service live as freely as any of the king's Protestant subjects, without being liable to the penalties of any of the laws relating to Popish recusants.

Father Huddleston's "mind failed" before he died and Louis de Duras, 2nd Earl of Feversham, one of the French nobles of the Duke of York's household/James II's court--who had been present when Father Huddleston received Charles II into the Church--took care of him. Father Huddleston was buried in St. Mary-Le-Strand on September 13, 1698.
Posted by Stephanie A. Mann at 12:30 AM