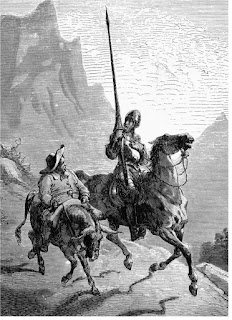 Miguel de Cervantes and William Shakespeare died days apart, 400 years ago, each of them a giant in his own language and literary tradition. But a difference in the scale of quatercentenary [sic] celebrations in their respective countries and around the world is leading some fans of the author of Don Quixote to cry foul.

While "all the world's a stage" for the British bard thanks to the rollout of the massive Shakespeare Lives programme of arts events around the globe, celebrations of the life of his Spanish contemporary are perhaps "more honoured in the breach than the observance".

Shakespeare Lives aims to reach half a billion people worldwide - the first screenings of The Complete Walk, 37 short films to represent the complete body of the bard's stage plays, took place at the weekend. The Spanish government's action plan for Cervantes, on the other hand, seems far less ambitious... and leans heavily on exhibitions and conferences in big city museums and libraries.

This has provoked some rather unchivalrous comments from bigwigs in the field of Spanish culture.

"We've had 400 years to prepare for this," said Dario Villanueva, director of the Spanish Royal Academy, shortly after a letter from UK Prime Minister David Cameron introducing Shakespeare Lives was published in major newspapers around the world.

"There are a few events lined up but the figure of Cervantes deserves a major gesture on the part of our top institutions."

The Spanish Culture Ministry has admitted that the programme remains a "work in progress" and that some events will not emerge from the pipeline until 2017.

Since I have Chesterton on my mind, here's a snippet of his Lepanto--Cervantes was there at the great victory of the Holy League--and Cervantes is already thinking of his great hero:

And, Chesterton wrote his own homage to Cervantes in his last novel, The Return of Don Quixote!

Finally, here's the great anthem from The Man of LaMancha, "To Dream the Impossible Dream", sung by the original Broadway Don Quixote, Richard Kiley!

May Miguel Cervantes, hero and author, rest in the peace of Christ, having reached the reachable Star of Heaven!
Posted by Stephanie A. Mann at 12:30 AM