"Intolerance" in the Morning 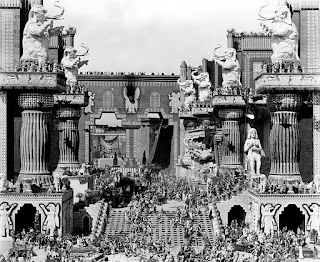 I caught the end(s) of D.W. Griffith's Intolerance the other morning on Turner Classic Movies. In three of the four interwoven stories Griffith traces, someone needs to get somewhere fast to warn or save someone else. In the Modern Story, the Boy is about to executed for a murder he did not commit and the race is on to convince the governor to pardon him and then to reach the jail in time to stop the execution. In the Babylon Story, the Bacchanal is in full swing (with the Ruth St. Denis dancers performing) when the Mountain Girl arrives to warn Belshazzar that Cyrus is on the way; in the French story, Prosper wants to rescue Brown Eyes from the St. Bartholomew's Day Massacre. Spoiler alert: only the Modern Story ends with a successful intervention, just before the hangman's trap is about to be sprung.

Only one story has no rescue attempt: the Judaean story, as Jesus is led off to be crucified. The enemies of love in that story are the Pharisees, whom Griffith juxtaposes with the reformers that almost ruin the lives of The Boy and The Dear One. But the Judaean Story is one story that has the ultimate rescue, and Griffith leaves it out: The Resurrection!

Griffith tells the four stories to illustrate his theme, as the opening title cards describe it: Our play is made up of four separate stories, laid in different periods of history, each with its own set of characters. Each story shoes how hatred and intolerance, through all the ages, have battled against love and charity. Therefore, you will find our play turning from one of the four stories to another, as the common theme unfolds in each. 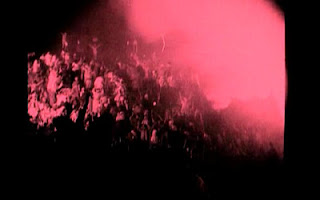 At the end, as this site details, the Crucifixion is the last image of the Judaean story and then comes Griffith's epilogue, influenced by the Progressive ideals of his age:

The Judean Story finishes with brilliant light streaming from the top of the hillside where the crucifixion has taken place.

In a moralistic, preachy epilogue, director D. W. Griffith ends the film with an idealistic vision of a day: "when cannon and prison bars wrought in the fires of intolerance -" will no longer prevail. Storm clouds move above a modern battlefield scene, where guns are fired, lines of battle between soldiers are enjoined, and flashes of lightning spark. Hand-to-hand fighting between two men is centered in an iris and mortar fire blasts from giant guns. A military tank moves behind the battle lines. Prisoners in striped uniforms in a long corridor shake their fists up toward a prison wall. In the cloudy sky above the modern-day battlefield, white robed, pacifistic, angelic figurines appear, as one of the hand-to-hand combatants holds his rifle in mid-air before bayoneting his fallen opponent. "And perfect love shall bring peace forevermore." All the soldiers on the battlefield look up and drop their rifles.

An open vehicle with passengers waving happily from its sides flies through (superimposed) clouds. "Instead of prison walls -- Bloom flowery fields." Brilliant light descends from above toward the exterior of a prison. The prisoners who are gesturing toward the wall suddenly move through it (again superimposed trick photography) - the prison walls disappear. The exterior of the prison dissolves into an open country scene with a flowering field in the foreground, and mountains in the background. The field is filled with black workers. The soldiers on the battlefield extend their arms to the sky as clouds (with the angelic figurines) descend toward them. In a May Day type celebration, people happily dance on a grassy field, and two children sit on a unused cannon which has sprouted weeds and flowers. Two other children, a little boy and girl, are in the foreground playing happily together - he puts flowers in her hair, she blows him a kiss, and they both hug each other. From the battlefield, the soldiers look up and cheer toward the angelic figurines. A brilliant white cross appears over the scene. There is a final medium-close shot of the woman rocking the cradle.

The woman rocking the cradle is Lillian Gish.

William M. Drew suggests in D.W. Griffith's Intolerance: Its Genesis and Its Vision, that Social Gospel Christianity and the ideals of the Progressive movement influenced Griffith's views of religion and society.
Posted by Stephanie A. Mann at 12:30 AM