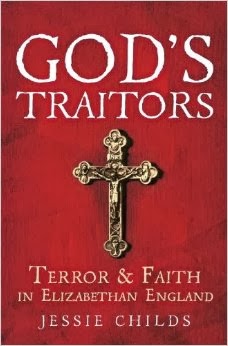 Five Came Back: A Story of Hollywood and the Second World War
Mark Harris (Canongate)

I have not read the others, but I think it should win as book of the year!

J.J. Scarisbrick reviews God's Traitors for The Weekly Standard and comments particularly on the Vaux women and their efforts for other Catholics and the missionary priests:

Despite its rather contrived title, this is a fine book: extraordinarily learned, exciting (most of the time), and beautifully written. There is already an enormous body of writing about how English Catholicism survived the tidal wave of the Protestant Reformation under Elizabeth, but this study must have a special place therein.

It centers on one distinguished Roman Catholic dynasty: the Vaux (pronounced Vorx) family of Harrowden Hall in Northamptonshire, which, along with Huddlestones, Treshams, Catesbys, and dozens of others—many of them linked by marriage—formed the backbone of Catholic recusancy (i.e., non-conformity, from the Latin recusare: to refuse). Recently ennobled at the time of the Reformation and well connected, the Vauxes were a good choice. But, as it happens, they had already been biographed by a very distinguished historian of recusancy, Father Godfrey Anstruther, in the 1950s. His is a learned and lively book, and it should have received more recognition in this one. But this is an even better book—even more lively and learned, and a historiographical age away from its predecessor. So, yes, we needed it.

And what a story it tells: plots and counterplots, assassinations and Armadas, horrendous torture and unspeakably gruesome executions, stinking prisons, secret messages written in orange juice (invisible until heated), spies and traitors and clandestine printing presses. Hollywood could not have made it up.

I would say that Childs gave Father Anstruther his due but did her own work and research--her book makes this history more accessible and mainstream.

It is three other women, Anne and Elizabeth Vaux, daughters of that same third baron, and Eliza, their stepsister, who steal the show. Unmarried Anne gave her all to caring for Garnet, moving with him as he bolted from one safe house to another in order to elude detection; Elizabeth, a fiery widow, was another devotee of Garnet and mother of a zealous Catholic family; Eliza, no less committed, was a particular associate of John Gerard. All three were hunted down and suffered for their faith. Anne spent time in the Tower of London, and Eliza was sent to another London jail, the Fleet. They were not the only ones. As the author explains, women played a crucial role in the story of this underground Catholicism: harboring and succoring the missionary priests, guarding Mass vestments, portable altars, missals, and relics—and, above all, catechizing their children and even their servants.

Holy women had hitherto usually been nuns or hermits. Now it was laywomen—virgins like Anne Vaux, as well as mothers and wives presiding over Catholic households—who led the way, and were even being martyred.

Finally, Scarisbrick suggests a topic for Childs' next book:

The climax is the infamous Gunpowder Plot of November 1605—a plot as wicked as it was disastrous for the Roman Catholic cause. Childs explains vividly how it came about that a group of violent Catholic hotheads—jihadists, indeed—maddened by decades of persecution and brought to blind anger by the failure of the new monarch, James I (son of Mary Queen of Scots, whom many Catholics regarded as a martyr), to honor his promise of toleration, decided on fearful revenge. They would slaughter the king, his wife, ministers, peers, bishops, and likely many MPs in one colossal explosion as James came to the House of Lords to open the second session of his first Parliament. The plotters would then seize power for themselves.

This is a huge subject in itself. Gallons of ink have been spent on it, and there are many questions still to be answered. For example, was not the plot known to—and carefully “nursed” for his own nefarious purposes by—that arch-villain (as Catholics saw him) Robert Cecil, the king’s chief minister? Were some of the plotters double agents? Once the plot was “discovered” and its ringleaders had fled, what were they planning to do? Above all, who was the “great nobleman” who would presumably have claimed the throne—and without whom the plotters (who were “mere” gentlemen and knights) could never have rallied the necessary support?

There is another book for the gifted Jessie Childs to write.
Posted by Stephanie A. Mann at 1:00 AM