Next for Our GKC Reading Group: The Thing 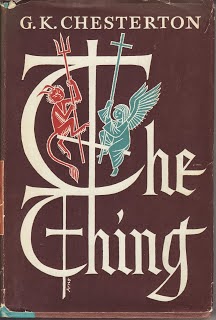 In a couple of weeks our Wichita branch of the American Chesterton Society will start our reading of G.K. Chesterton's The Thing: Why I am a Catholic. We are reading it from the Ignatius Press edition of the Collected Works: Volume III.

It seems to me that this Chesterton work might be excellent reading for the New Evangelization, which both Blessed Pope John Paul II and Emeritus Pope Benedict have proclaimed. As Dale Ahlquist notes in his Chesterton 101 lesson for this book:

The essays in this collection were originally written for Catholic publications and are somewhat different from his other journalism because here Chesterton is writing for a specifically Catholic audience. And yet his vigorous defense of the Catholic faith seems to invite all comers. But as for addressing Catholics, there is one passage that is strikingly relevant to modern Catholics who seem intent on “reforming” things in the Church, whether it be the liturgy, the moral teachings, or the fundamental doctrines of the faith: “In the matter of reforming things, as distinct from deforming them,” says Chesterton, there are two kinds of reformers. “Let us say, for the sake of simplicity, a fence or gate erected across a road. The more modern type of reformer goes gaily up to it and says, ‘I don’t see the use of this; let us clear it away.’ To which the more intelligent type of reformer will do well to answer: ‘If you don’t see the use of it, I certainly won’t let you clear it away. Go away and think. Then, when you can come back and tell me that you do see the use of it, I may allow you to destroy it.’”

I watched Raymond Arroyo interview Al Kresta about his new book, Dangers to the Faith: Recognizing Catholicism’s 21st Century Opponents on EWTN's The World Over. Arroyo quoted Kresta from the book saying that Catholics, including the laity, in the 21st Century still aren't prepared to defend the Faith, still aren't prepared to account for our joy in Jesus Christ and His Church. Even after the great teaching pontificates of Blessed John Paul II and Pope Emeritus Benedict XVI, as Kresta said, the hay is still in the lofts of the barns and hasn't reached the horses below. But so many lay evangelists have labored to get their messages out--the entire "Theology of the Body" effort for example. George Weigel has written and spoken about Blessed John Paul II in books, articles, interviews, and speeches. Father Charles Connor presented a season of exploring "The Thought of Pope Benedict XVI" on EWTN. Ignatius Press has published dozens of Pope Benedict/Joseph Ratzinger's books before and during his papacy. I don't think it's for lack of effort on the part of teachers. Many of them have been in the loft, preparing the hay for our consumption.

Perhaps it's us, the students--switching metaphors from the farm to the classroom--who aren't attentive and don't take the time to listen and learn. (We have met the enemy--the danger to the Faith--and he is us!) Or to quote G.K. Chesterton's response to the question "What's wrong with the world?"--"I am." "What's wrong  with the Church?" "I am."

So, if you are in Wichita, Kansas on February 21 and want to read Chesterton on Catholicism, you're welcome to come to Eighth Day Books (2838 East Douglas) at 6:30 p.m. We'll enjoy some pre-Lenten snacks and discuss the first ten essays in The Thing. Eighth Day Books should have Volume III of Chesterton's Collected Works in stock. Warren, the proprietor, has C. S. Lewis, G.K. Chesterton, Dorothy L. Sayers, George MacDonald, Charles Williams, et al, in a special section on the first floor.

As a sample, here's an excerpt from the essay titled "Why I am a Catholic," in which Chesterton discusses the Dissolution of the Monasteries:

Email ThisBlogThis!Share to TwitterShare to FacebookShare to Pinterest
Labels: American Chesterton Society, Catholic Apologetics, Dale Ahlquist, G.K. Chesterton, The New Evangelization, The Thing: Why I am a Catholic