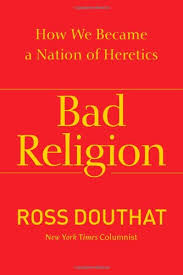 My husband and I visited our friendly neighborhood Eighth Day Books on Saturday and I purchased this book: Bad Religion: How We Became a Nation of Heretics. I am finding it fascinating reading. Heresies are essential topics in my study of Church History: the history of the Early Church can almost be seen as a struggle against heresy. As each heresy proposed a simple, logical way of understanding, for example, how Jesus was both God and Man, the bishops met at the councils and restated true Church teaching. The Arian heresy, particularly, divided the Church as St. Athanasius stood up against the world to defend the truth about Jesus. Sometimes we forget how cruel heresy can be (C. Fitzsimmons Allison wrote a book titled The Cruelty of Heresy: An Affirmation of Christian Orthodoxy that explored the more existential aspects of that cruelty), as the supporters of the heresy cast out the defenders of orthodoxy. I think we often view the orthodox as having all the power--but it isn't always so.
I'll post a review in the next couple of days, but for now, here's a couple of notes: Douthat's thesis is that the problem is not that religion is on decline in the U.S.A., but that we have almost too much religion, and most of it is unorthodox. While so much of the popular religion is unorthodox, the orthodox religion--let's use C.S. Lewis' term, "Mere Christianity"--is not strong enough, persuasive enough or perhaps even confident enough to call people back to historical, doctrinal, sacramental, and moral orthodoxy.  Douthat starts his review of these issues with the post-World War II situation, examines the era when Reinhold Niebuhr, Billy Graham, Archbishop Fulton Sheen, and Martin Luther King, Jr. demonstrated the strengths of Mainline Protestantism, Evangelical Protestantism, Catholicism, and the African-American Church. He then looks at the period of accommodation, including the sad story of the decline of the Catholic Church in America after the Second Vatican Council--his narrative seems accurate enough to me. Philip Jenkins, Russell Shaw, and Al Kresta (I want to read his new book and Eighth Day should have it in stock by our G.K. Chesterton reading group meeting this Friday) have covered some of the same ground in different works, but Douthat is both persuasive and compelling in his view of the past almost 60 years.
Posted by Stephanie A. Mann at 12:30 AM