In the reverse type on the cover of the January/February 2014 issue of the St. Austin Review, you might discern my name: 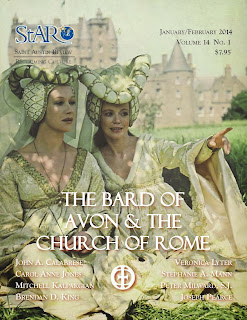 Then if you access the Table of Contents for the issue, you'll see my article on Pope Benedict's English Catholic Legacy listed "Inter Alia". StAR is a print review with limited on-line access, but I have submitted some texts to supplement the article on the StAR blog.
In a way, there's a connection between that StAR article and my article in the January/February 2014 issue of OSV's The Catholic Answer Magazine:

"How Can We Hear the "Voice of God"? Blessed John Henry Newman and conscience" is illustrated with a picture from the 2010 beatification of John Henry Newman. OSV recently updated its website and now all the articles I've written for TCA are available on-line!
Happy New Year! ﻿
Posted by Stephanie A. Mann at 12:30 AM