Sometimes I stumble across something on the web (ouch!)--the other day, after posting on Sir Colin Davis's death, I remembered that Davis had been one of the musicians who signed the letter to Pope Paul VI that led to the "Agatha Christie" indult for the traditional Catholic Mass (now aka the Extraordinary Form of the Latin Liturgy of the Roman Rite). Another name in that list is E.I. Watkin, whose biography was recently issued: 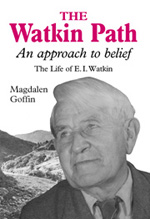 The Watkin Path: An Approach to Belief [by his daughter Magdalen Goffin] is a panorama of twentieth-century social and political history seen through the life of E. I. Watkin (1888–1981). The interplay of love, friction, war, politics and money, together with a relentless search for religious truth, makes this book read more like a novel than a biography.

Watkin was the only child of Emmeline Paxton Ingram, a daughter of Herbert Ingram, the founder of the Illustrated London News. His father was the nephew of Sir Edward Watkin, the Liberal MP and railway magnate, who started to build the first Channel Tunnel and later a tower to rival Eiffel’s where Wembley Stadium now stands. At birth Watkin was handed over to his Ingram grandmother, an old lady who lived alone in a mansion by the river at Walton-on-Thames. He met few other children, and his strange childhood may account for some of his eccentricities.

Watkin became a Roman Catholic when he was at Oxford. His experience as one of the inner circle of Catholic writers is revealing: He was allowed to publish his books on philosophy, history or literature, but when it came to the interpretation of the Catholic faith he was persistently harassed by the censors. Although Watkin was one of the foremost English precursors of the Second Vatican Council, he deeply deplored some of its consequences.

His extraordinary life experiences were many and varied: from sitting on Mrs Gladstone’s lap at the ceremonial opening of the Watkin Path up Snowdon, to falling instantly in love with Helena Shepheard at a party in 1912, at which point he stopped his diary writing. The story of that marriage, and the Watkin family’s engagement with politicians and theologians about the political and social issues of the time, make for a truly fascinating biography of a most extraordinary man.

At Oxford, Watkin studied at New College (which is actually quite old; founded in 1379, it was called "New College" to distinguish it from the older college at Oxford, Oriel, founded in 1326). Watkin was a mentor to Christopher Dawson in the latter's conversion to Catholicism and worked with Eric Gill and Donald Attwater on the Catholic pacifist movement Pax; additionally, he wrote many books:

Some Thoughts on Catholic Apologetics: A Plea for Interpretation (1915)

His son was a Benedictine monk, Abbot Aelred Watkin, of Downside Abbey:
Abbot Aelred Watkin was one of the most loved and most respected monks in the Benedictine Order. The two most conspicuous features of his character - a deep spirituality combined with an infectious love of life - are encapsulated in one of his favourite quotations from William Blake: "Everything that lives is holy; life delights in life."

He was born Christopher Ingram Watkin in 1918, the son of a Roman Catholic philosopher and historian, E.I. Watkin, their common middle name perpetuating descent from Herbert Ingram, the founder of the Illustrated London News. His mother, Helen Shepheard, was the daughter of Maria Pasqua, who had been a penniless Italian model until she was adopted by a member of the Baring family, the wealthy Comtesse de Noailles.
Posted by Stephanie A. Mann at 12:30 AM