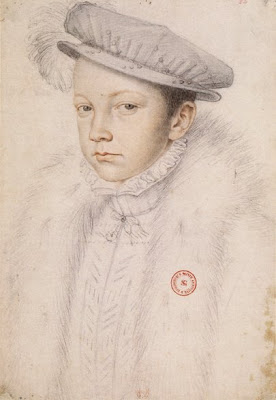 Francois II, eldest son of Henri II and Catherine de' Medici, was born at the Royal Chateau of Fontainebleau on January 19, 1544. He was the Dauphin of France and his marriage to Mary of Scotland was arranged in 1548.
He and Mary came to the throne of France when Henri II died after an accident in a jousting match on June 30, 1559 at the Place des Vosges in Paris. Henri's eye was pierced by a lance and he died on July 10, 1559. When crowned and anointed King of France at Reims on September 21 that year, Francis was only 15 years old. His mother served as Regent, although the Guise family, Mary's uncles Francis and Charles probably held the most control.
He was very sickly and died on December 5, 1560 after an ear infection lead to brain abscess. His brother, Charles IX was also rather sickly and died young. The last heir of the House of Valois was Henri III.
Francois II's father Henri II had supported Mary's claim to the throne of England and hoped through her marriage to the Dauphin--and their children-- to extend the "Auld Alliance" between France and Scotland to outright French rule of Scotland. French rule of Scotland would have been a tremendous threat to England, of course, and that was certainly one of the reasons that Henry VIII had desired marriage between Mary of Scotland and his heir, Edward when the two were children.
Posted by Stephanie A. Mann at 2:04 AM