Preparing for an Interview 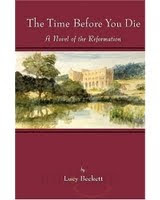 Thinking about an interview I'll do next week on the Son Rise Morning Show about the deaths of Mary I and Reginald Cardinal Pole on the same day, I recalled this novel by Lucy Beckett: The Time Before You Die: A Novel of the Reformation, published by Ignatius Press in 1999. It was a fairly effective novel charting the effects of the Dissolution of the Monasteries on one man's life, a former Carthusian monk. The novel also reflects on the efforts of Reginald Pole to re-establish Catholicism in England during Mary's reign.

The novel lacked the tone of apologetic certainty in Robert Hugh Benson's novel The King's Achievement, and it lacks the poignancy and range of H.F.M. Prescott's great chronicle, A Man on a Donkey. Robert Fletcher, the monk who converts to Lutheranism and marries, finds much to criticise in the Church. Reginald Pole saves him from the burning he would have surely faced and even communicates his feelings of guilt for the death of his mother, Margaret Pole and his brother, while his surviving brother Geoffrey blames himself for succumbing to threats of torture. Pole knows, however, that it was his letter to Henry VIII that caused the fall of his family--the letter in which he told Henry that what he was doing was wrong.

Lucy Beckett has also written a novel about Germany between the two world wars of the twentieth century, A Postcard from the Volcano, a study of Western literature, In the Light of Christ, and several studies of Richard Wagner operas and Wallace Stephen's poetry.
Posted by Stephanie A. Mann at 2:02 AM