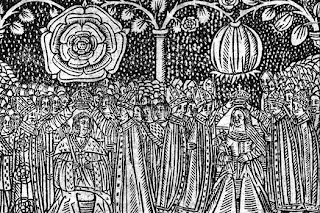 Garrett Mattingly notes in his biography of Catherine of Aragon, "It is hard to imagine Henry and Catherine at their coronation. Their images are pale as ghosts beside their later selves . . ." In 1509, Henry was young, tall, an athlete with a ruddy round-cheeked face, while Catherine was fresh, delicate, sweet and winsome. As Mattingly notes, "The Londoners thought her bonny . . . Henry thought her bonnier than any."

I cannot help but think of the juxtaposition of these dates in June, separated by momentous years and events. In June of 1509, Catherine and Henry were wed and crowned; 20 years later Catherine appeared in a court to try the validity of her marriage; six years after that dramatic trial, one of her strongest defenders was executed when Bishop John Fisher opposed the king's supremacy.

But in 1509, the month of June was filled, as Mattingly comments, with festivity, music, laughter, and dancing. The reign of Henry the Eighth and Catherine of Aragon had begun.
Posted by Stephanie A. Mann at 5:47 AM