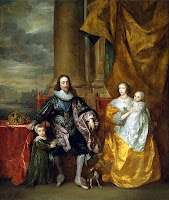 On June 13, 1625, Charles I of England married Henrietta Maria, sister of King Louis XIII of France. His father, James I, had attempted to negotiate a match between his heir and the Infanta Maria Anna of Spain, but Philip III's demands for Charles to remain in Spain and become Catholic were too much. Nevertheless, negotiations for him to marry another Catholic princess meant James and Charles had to promise Henrietta Maria freedom of religion which required Catholic priests at the English Court and some amelioration of the recusancy laws against Catholics in England.

These points of the marriage treaty were very unpopular with the Protestants of England--both Anglicans and Puritans. Henrietta Maria was not crowned queen of England because she could not participate in the Anglican service. At first, Charles and Henrietta Maria did not get along well, but they did develop a very loving relationship. During the period of his personal rule, Charles and Henrietta protected Catholic priests from execution, but when Parliament was in session, they were unable to influence the courts.

As I have discussed before on this blog and in Supremacy and Survival: How Catholics Endured the English Reformation, the loving relationship between the two gave many in England pause--they thought Charles might become Roman Catholic for love of his wife and that he allowed her too much freedom to practice her religion and even bring members of Court to conversion.
Posted by Stephanie A. Mann at 5:45 AM