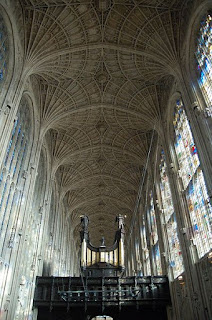 In last year’s December 19th issue of the Wall Street Journal, the back page of the Weekend section included a story on King’s College Chapel at the University of Cambridge. The author noted how the changes in the monarchy delayed and then jump-started its completion after Henry VI began construction in 1446. The delays are understandable when you remember that Edward IV murdered Henry VI and then Richard III usurped the throne, only to be vanquished in the battle of Bosworth Field. The late medieval kings of England were too busy fighting for the throne to finish building a chapel.

When Henry VII came to the throne, Carola Hicks, author of The King’s Glass: A Study of Tudor Power and Secret Art, says that it took him some time to realize the propaganda opportunities for his new dynasty in the chapel’s decoration. The Tudor founder aligned himself iconographically with the kings and prophets of the Old Testament and the apostles of the New Testament. After his father died, Henry VIII had to be advised by Cardinal Wolsey that, since he needed the support of the University of Cambridge in the matter of his marriage to Catherine of Aragon, he had better finish what his father started—although the rapid succession of his queens throughout his reign sometimes made hard work for the artisans installing the stained glass. Anne’s out—Jane’s in; Anne’s out—Catherine’s in!

Wonderfully, King’s College Chapel survived Edward VI’s Calvinist Reformation, not to mention the English Civil War and the Interregnum rule of the iconoclastic Puritan Parliament and Oliver Cromwell. We are also fortunate that no one remodeled it, as the Cathedral of Notre Dame in Paris was during the reign of King Louis XIV when stained glass was not in style. The Gothic architecture so highly developed in the fan vaulting and perpendicular style would fall out of favor in England after the English Reformation, not to be revived until Pugin began his great work in the nineteenth century.
Posted by Stephanie A. Mann at 5:53 AM