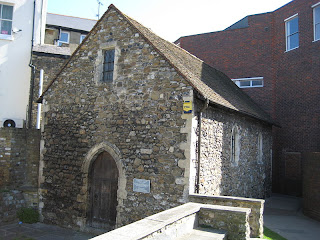 Why did I choose today's shrine? Because I received a mailing from The Edmundite Mission of Selma, Alabama. According to the order's website:

The Society of Saint Edmund began in the 1840s in a rural region of France to revitalize the faith of people who had become increasingly alienated from the Catholic Church. Our founder, Father Jean-Baptiste Muard began the Society at St. Mary’s Abbey in Pontigny, one of the great Cistercian monasteries of France and the final resting place of Saint Edmund of Canterbury.

Known as “auxiliary priests,” the Edmundites took on assignments and challenges that local clergy were unable to do. Ardent and powerful preachers, they brought the message of the Gospel from village to village. The order flourished and in time the Edmundites re-established Mont Ste. Michel as a place of pilgrimage and opened several Catholic schools.

St. Edmund of Canterbury died in exile in France in 1240, but his friend Richard of Chicester (who would also be canonized) wanted to honor him in England, so he built a small chapel in Dover:

Near to the Maison Dieu [the hospital] the monks of the Priory of St Martin established a cemetery for the poor with its own small chapel. The chapel, dedicated to St Edmund, was consecrated on 30 March 1253 by Bishop Richard of Chichester . St Richard had always wanted to dedicate a chapel to St Edmund, who had been his friend. The fulfilment of this wish was one of Richard’s last acts as he died four days later in the Maison Dieu. After his death Richard’s body was returned to the chapel to be ‘eviscerated’ (have the internal organs removed) in preparation for the journey to Chichester Cathedral to be buried. The viscera were buried in the chapel altar and both places later became places of pilgrimage.

The chapel was dissolved along with the Maison Dieu in 1544. Its history since then is only sketchily known. Immediately after the dissolution, it was probably still associated with the fortunes of the Maison Dieu and became part of a victualling store for the Navy. After that it became a store-house for the shops which came to be built in Biggin Street. In the middle of the nineteenth century it was converted into a two-floor building, and became a dwelling-house and forge.

In 1943 artillery shells destroyed the two shops hiding the chapel on the Priory Road side, leaving the chapel itself untouched. Attempts to get it scheduled as an Ancient Monument in 1963 failed and it was scheduled for demolition. In 1965, however, it was privately purchased and restored in 1967-8. At least 75 percent of the building seen today is original.

Note that St. Edmund died at the Cisterican Abbey of Pontigny, where both St. Thomas a Becket and Stephen Langton would find refuge during their difficulties as Archbishops of Canterbury. It's in Chablis country, and looks well worth a pilgrimage!

And yes, I sent the Edmundites some money: they are serving the poor in our country faithfully and with love.
Posted by Stephanie A. Mann at 2:05 AM