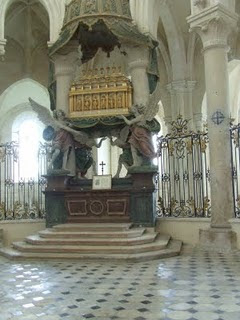 On his Porta Caeli blog, the elegant and shadowy "Patricius" (note his profile picture!) has posted some pictures and notes from the former Cistercian abbey church at Pontigny. Three Archbishops of Canterbury took refuge there in exile, as I noted on my post about St. Edmund of Canterbury.

The Cistercians are long since departed. In the Refectory there was an exhibition about a period when the abbey was in lay ownership who hosted conferences for pretentious intellectuals- of which France has a fine tradition. The church itself is a fine gothic building with a seventeenth century stalls and screen. It has a slight air of musty decay and, as with so many historic French churches, a rather poor looking modern altar.