The Birth of Elizabeth Stuart, Future Winter Queen of Bohemia 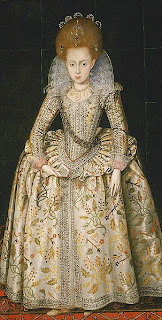 Elizabeth, eldest daughter of King James VI and I and Anne of Denmark, was born on August 19, 1596 in Scotland. She was the daughter the Gunpowder Plotters intended to kidnap and name Queen of England and Scotland after blowing up the Houses of Parliament. She was only nine years old at the time so Catesby and the other plotters planned to have Henry Percy, the "Wizard Earl" of Northumberland serve as her Protector--her Catholic Protector.

Elizabeth became Queen of Bohemia on November 7, 1619. She had married Frederick V, Elector of the Palatine on February 14, 1613. The purpose of the marriage was to strengthen James's ties to Protestant rulers on the Continent, easing Parliamentary fears that he was too conciliatory to Catholic rulers. But as might be indicated by their wedding date, it was a romantic and true marriage.

She is called the Winter Queen because her reign as Queen of Bohemia was brief. Frederick was defeated at the Battle of the White Mountain on November 8, 1620. The royal family fled and lived in exile for their rest of their lives. Frederick and Elizabeth had 13 children: seven boys and six girls. Frederick died in 1632, so Elizabeth lived many years as a widow. Two of their sons, Maurice and Rupert, served the Royalist cause during the Civil War. Elizabeth returned to England during the reigns of both her brother (Charles I) and her nephew (Charles II), dying in 1662 on February 12 in London.

One of her daughters provided the path to Protestant succession in 1701: Sophia, who had married the Elector of Hanover, Ernest Augustus. Sophia died just before Anne, James II's younger daughter died in 1714. Thus, George I established the Hanoverian dynasty and the current line of succession.

One of her other daughters, Louise Hollandine of the Palatinate, became a Catholic nun with the assistance and encouragement of King Louis XIV. She was a Cistercian Abbess at Maubuisson in the Val-d'Oise in the Ile-de-France, north of Paris. Elizabeth's sixth son, Edward, Count Palatine of Simmern also became a Catholic after marrying Anna Gonzaga of Mantua in 1645. Except for his Catholicism, his heirs could have succeeded to the throne of England.
Posted by Stephanie A. Mann at 2:05 AM

Email ThisBlogThis!Share to TwitterShare to FacebookShare to Pinterest
Labels: Gunpowder Plot, James VI and I, Queen of Bohemia, the Winter Queen