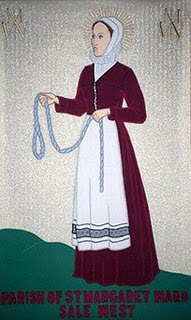 There are really two events to remember today. One is the execution of six Catholics--one laywoman, four laymen and one priest--in London as part of the English government's reaction to the attempted invasion of England by the Spanish Armada. The other is the memorial of three female English Catholic martyrs, who were canonized among the Forty Martyrs of England and Wales in 1970, but have this special day all to themselves on the liturgical calendar of the Dioceses of England and Wales.

On this memorial of Saints Margaret Clitherow (or Clitheroe), Anne Line and Margaret Ward, I invite you to read my article posted on Associated Content, telling their stories and describing their deaths.

They share the date of St. Margaret Ward's execution on August 30, 1588--she was part of a second group of martyrs after the failure of the Spanish Armada. She is a virgin martyr: she helped Father William Watson escape from Bridewell Prison. She visited him often enough that the jailer finally allowed her to enter without searching her, so she was able to smuggle in a rope. Father Watson injured himself unfortunately while escaping and was unable to retrieve the rope. Margaret found John Roche to help the injured priest once out of prison and both she and John were arrested; John because he had exchanged clothing with the priest and Margaret because the jailer figured out that she was the last person to visit Father Watson before he escaped. She was held in chains, hung up her hands and scourged as the authorities attempted to force her to tell them where Father Watson went after escaping Bridewell prison. She refused, even though she acknowledged that she helped him. Offered a pardon for attending Church of England services, she again refused. The torture inflicted upon her left her partially paralysed and she had to be carried to Tyburn for hanging.

Also martyred that day were Blessed John Roche (who had assisted Margaret Ward in the escape of Father William Watson), three other laymen who had assisted priests, Blesseds Richard Lloyd, Richard Martin, and Edward Shelley, and one priest, Blessed Richard Leigh. The regime was certainly sending a message about laity who assisted Catholic priests.

I have also told the stories of St. Anne Line and St. Margaret Clitherow on this blog on the dates of their executions, here and here. As soon as the podcast from my discussion with Barbara McGuigan from Saturday's "The Good Fight" is available, I will post it!

Picture credit: this blog for the image of St. Margaret Ward with the rope she smuggled into Father William Watson--or the rope by which she was hung. I am not sure if the Father Watson she saved is the same priest executed early in James I's reign for treason for his role in the Bye Plot.
Posted by Stephanie A. Mann at 2:31 AM