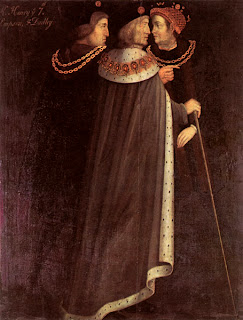 Edmund Dudley and Richard Empson, counsellors to the late King Henry VII, were executed on August 17, 1510 and buried in the Chapel Royal of St. Peter ad Vincula (St. Peter in Chains) in the Tower of London. Henry VIII ordered their executions early in his reign.

According to the official site for the Tower as a Historic Royal Palace, St. Peter ad Vincula is:

A Tudor chapel containing monuments to residents of the Tower and its prisoners, including those executed on Tower Green.

Originally a parish church, the Chapel was incorporated into the walls of the castle during Henry III’s expansion. It has been rebuilt at least twice, once in the reign of Edward I, and then again in its present form in Henry VIII’s reign.

Three queens of England Anne Boleyn, Catherine Howard and Jane Grey, and two saints of the Roman Catholic Church, Sir Thomas More and John Fischer, are buried here. Their headless bodies were buried under the nave or chancel without memorial until the 19th century when remains found in the nave were re-interred in the crypt.

The chapel also has many monuments which commemorate officers and residents of the Tower who worshipped here. It remains a place of worship for the Tower’s community of 150 or so residents.

The other chapel in the Tower is the Chapel of St. John, which was:

Part of the original construction of the White Tower begun in 1078 by William the Conqueror. The chapel was at the heart of the king’s royal and ceremonial apartments and would probably originally have been brightly painted.

The Chapel of St. John's is not only the best-preserved interior in the White Tower, but also one of the best examples of Anglo-Norman church architecture in England. Although it was probably orginally brightly painted, Henry III (1216-72) embellished it with stained glass windows representing the Virgin and Child and St. John the Evangelist, a painting of Edward the Confessor, and a figure of Christ. For much of its later history, it was used to store state records.

By tradition, it was here that King Henry VII's wife, Elizabeth of York, was laid in state after dying at the Tower in childbirth. It was also here that Henry VIII’s eldest daughter, Mary, was betrothed by proxy to Philip of Spain. St. John’s is still a royal chapel and the Queen’s Chaplain performs a series of services throughout the year.
Posted by Stephanie A. Mann at 2:04 AM