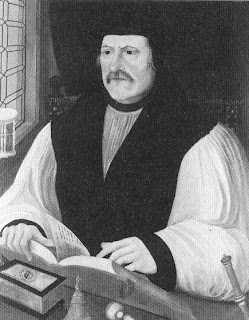 Matthew Parker, future chaplain to Anne Boleyn and Archbishop of Canterbury for her daughter Elizabeth I, was born on August 6, 1504.

He attended the University of Cambridge at Corpus Christi college and was influenced by the Cambridge reformers, who were bringing Lutheran ideas of reform to England.

Anne Boleyn appointed Parker her chaplain and also made sure he received other preferments. He survived her fall and execution, and became one of Henry VIII's chaplains. He was a moderate reformer during the reigh of Henry VIII; he accepted the more conservative reforms Henry demanded in 1539 and 1540.

When Henry VIII died, Parker got married; under Edward VI he supported the efforts of John Dudley, the Duke of Northumberland to continue the reformation. He became friends with Martin Bucer and preached his funeral sermon in 1551. When Mary I came to the throne, Parker lost all his benefices because he was married, but he was otherwise free and did not seek exile. Even though he had been close to Northumberland he was not arrested or harrassed in any way during Mary's reign.

Elizabeth I named him Archbishop of Canterbury in 1559; he was never involved in matters of state and never part of her Privy Counsel. He struggled throughout his tenure to maintain uniformity in the Church of England and against the puritan reformers who wished to eliminate any vestiges of Catholicism in the established Church. For instance, the issue of clerical vestments during Book of Common Prayer services involved Parker in controversy that he thought interferred with the true course of reform.

His friendship with Martin Bucer must have influenced him in this matter, for Bucer tried to stay out of the same type of controversies over vestments and the eucharist during his exile in England. As Pollard wrote of Parker in the 1911 Encyclopedia Britannica: "He distrusted popular enthusiasm, and he wrote in horror of the idea that “the people” should be the reformers of the Church. He was not inspiring as a leader of religion; and no dogma, no original theory of church government, no prayer-book, not even a tract or a hymn is associated with his name. The 56 volumes published by the Parker Society include only one by its eponymous hero, and that is a volume of correspondence. He was a disciplinarian, a scholar, a modest and moderate man of genuine piety and irreproachable morals."

It was for Archbishop Matthew Parker that Thomas Tallis composed the psalm tune for "Why Fum'th in Flight" which Ralph Vaughn Williams used in his "Fantasia on a theme of Thomas Tallis".
Posted by Stephanie A. Mann at 2:06 AM