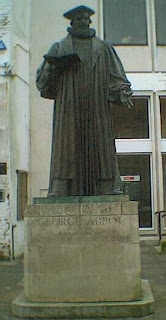 Abbot was born on October 19, 1562 in Guildford, Surrey. Like Hilaire Belloc, whose birthday we recently celebrated, he attended Balliol College at Oxford. Unlike Belloc, however, Abbot was a Puritan, which sometimes caused conflict with both James I and Charles I. Nevertheless, he did support the Apostolic Succession of the Bishops in the Church of England. Abbot was one of the translators of the Authorized Version of the Bible, the King Jame's Bible, contributing to the work on the Gospels, the Acts of the Apostles, and the Book of Revelation. He supported the marriage between the Princess Elizabeth and Frederick, the Elector Palatine and did not support the marriage beween Prince Charles and the Spanish Infanta. Abbot pursued and persecuted Catholics--fifteen Catholic priests and laity were executed during his tenure. Although seven were martyred in 1616, the king's diplomatic efforts created gaps in the persecution--in the 1620's for example.

He famously suffered from depression, and his ability to fulfill his duties was questioned even when he was cleared from manslaughter charges, after he accidently shot a keeper while aiming his crossbow at a deer. Nonetheless he attended James I when the king was dying. He further angered Charles I by refusing to allow a sermon supportive of finances for the king and stayed away from Court until his death and Laud's succession. He was buried in Holy Trinity, Guildford.
Posted by Stephanie A. Mann at 2:00 AM

Email ThisBlogThis!Share to TwitterShare to FacebookShare to Pinterest
Labels: Archbishops of Canterbury, Catholic Martyrs, Charles 1st, James VI and I