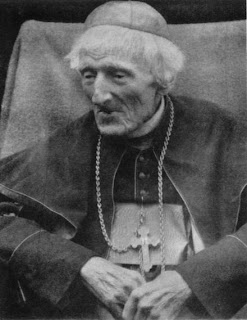 John Henry Cardinal Newman died on August 11, 1890. The Times of London reported his death on August 12:

"We have to record, with feelings of the most sincere regret, the death of His Eminence Cardinal Newman. He died last evening at the Oratory, Edgbaston, in his 90th year, after less than three days' illness. The Cardinal has for many years manifested the feebleness of advanced age, although he has fully retained his mental faculties, and has rallied in a wonderful manner from more than one severe illness. . . .

"The medical attendants have issued the following account of their patient's last illness. "The Oratory, August 11, 1890. His Eminence Cardinal Newman was seized with inflammation of the right lung at 2 o'clock a.m. on Sunday, August 10. He very rapidly became worse until this evening at 8:45, when he expired. His Eminence expressed himself as feeling quite well an hour before this attack occurred.—G. Vernon Blunt, M.D.; C. H. Jenner Hogg, M.R.C.S.E." The private prayers of the congregation were asked for the Cardinal at the Oratory Church on Sunday, and in the evening there were numerous and anxious inquiries respecting him. He will be buried at the little country retreat of the Oratorians, at Rednall, where there is a private cemetery and chapel. The body will be exposed in the Oratory Church from noon today until it is removed for burial. The date of the funeral is not yet fixed."

Of course, he was buried in Oratorian cemetery in Rednal with Ambrose St. John his great friend and aide in establishing the English Oratorian Congregations. Now his shrine is in the Birmingham Oratory. You might remember that when they exhumed his body in preparation for the shrine, the grave was empty.

Ex umbris et imaginibus in veritatem--Out of shadows and imagination into truth.

Two days before he died his niece Grace Longford, the only child of his estranged sister Harriett visited him. Newman had not seen her since she was three years old.

ETERNAL Father, You led JOHN HENRY NEWMAN to follow the kindly light of Truth, and he obediently responded to your heavenly calls at any cost. As writer, preacher, counsellor and educator, as pastor, Oratorian, and servant of the poor he laboured to build up your Kingdom.

Grant that through your Vicar on Earth we may hear the words, 'Well done, thou good and faithful servant, enter into the company of the canonized saints.'

May you manifest your Servant's power of intercession by even extraordinary answers to the prayers of the faithful throughout the world. We pray particularly for our intentions in his name and in the name of Jesus Christ your Son our Lord. Amen.
Posted by Stephanie A. Mann at 2:05 AM