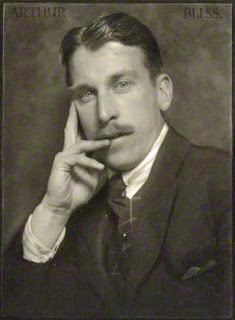 Arthur Bliss was born on August 2, 1891 (just nine days before Blessed John Henry Newman died!). He attended Pembroke College at Cambridge and served in WWI with distinction, suffering wounds and a gas attack. His brother Kennard died in the war, like so many thousands of that generation. Arthur became a Catholic in 1918.

He was a composer and conductor for the BBC and became Elizabeth II's Master of the Queen's Music, composing occasional music for great events. The Arthur Bliss Society promotes his work. He was influenced by Ralph Vaughn Williams, Edward Elgar, Stravinsky and Ravel.

Sir Arthur Bliss studied music at Cambridge under Charles Wood and at the Royal College of Music in the company of other brilliant students including Herbert Howells, Ivor Gurney and Eugene Goosens. His musical studies were interrupted by the outbreak of the First World War in which he gave distinguished service but was also wounded in the Battle of the Somme and gassed at Cambrai. The tragic death in battle of his brother,Kennard, together with his own war experiences had a profound and lasting impact on his life and in his music, and found expression most particularly in his choral symphony, Morning Heroes (1930).

After the war Bliss established himself as a composer on the London scene before moving to the USA in the early 1920s to accompany his American father who had retired there. In California he met Gertude Hoffmann, whom he married and brought back to London in 1925. They had two daughters, Barbara and Karen.

In the meantime Bliss the composer continued to flourish, being commissioned to write the cinema's first great film score with the music for Alexander Korda's film of H.G. Wells' Things to come (1935).

In 1941 he became director of music at the BBC, where he established programmes such as "This Week's Composer", still enjoyed today in a similar form. Following his knighthood in 1950 he was appointed Master of the Queen's Musick. In this capacity he composed numerous works and fanfares for royal occasions including the Investiture of the Prince of Wales (1969). He continued composing up until his death at the age of 83.

Arthur Bliss was a prolific and versatile composer and he wrote over 140 works for every combination of voice and instrument, including large scale orchestral and choral works, music for brass bands, chamber instrumental music, songs, operas, ballets and film music. He even found time to indulge his passion for literature and wrote many articles on musical issues which are now collected together in Bliss on Music.

Bliss's autobiography As I remember, provides a rich insight into his character, his life and his work.

Here is a review of a cd of his sacred music, which includes a music setting of Gerard Manley Hopkin's poem, "God's Grandeur":

THE WORLD is charged with the grandeur of God.
It will flame out, like shining from shook foil;
It gathers to a greatness, like the ooze of oil
Crushed. Why do men then now not reck his rod?
Generations have trod, have trod, have trod;
And all is seared with trade; bleared, smeared with toil;
And wears man’s smudge and shares man’s smell: the soil
Is bare now, nor can foot feel, being shod.

And for all this, nature is never spent;
There lives the dearest freshness deep down things;
And though the last lights off the black West went
Oh, morning, at the brown brink eastward, springs—
Because the Holy Ghost over the bent
World broods with warm breast and with ah! bright wings.
Posted by Stephanie A. Mann at 2:08 AM