St. Clare and the Poor Clares in England 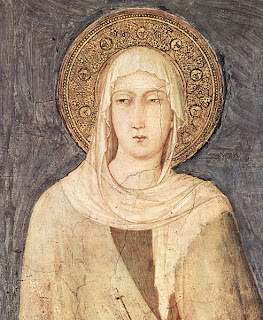 Today is the feast of St. Clare, who followed St. Francis's devotion to poverty more closely than any of his other disciples.

The Poor Clares were in England before the Reformation, of course. The Abbey of the Order of St Clare, for example, was located in Aldgate on the eastern edge of London. The Abbey was surrendered in 1539. Venerable Mary Ward established an English convent of Poor Clares in Gravelines, Spanish Netherlands in 1607. During the French Revolution, the nuns of that house had to leave France. They came to England in 1795.

Here is a sad story from earlier this year in The Catholic Herald about the closing of a Poor Clare convent after 160 years:

The Poor Clares were founded by St Clare of Assisi and St Francis of Assisi on Palm Sunday in the year 1212 and spread throughout Europe. Their primary vocation was a contemplative life to pray in seclusion for the needs of the world. At Baddesley Clinton the Poor Clares were also involved in running a local school.

In 1850 a group of six Sisters arrived in Warwickshire from Bruges and the Poor Clare community of Baddesley Clinton was the first community of Poor Clares of the Colettine Reform to be re-established in England after the Reformation.

The community had close links with Blessed John Henry Newman, who lived in the Oratory House in Edgbaston, Birmingham. This holy parish priest used to visit the Sisters and bring provisions given by his parishioners – they used to leave these in a box at the back of the church situated next to the Oratory House.

The Sisters were poor and Cardinal Newman brought other gifts, including Christmas and Easter hampers at his own expense.