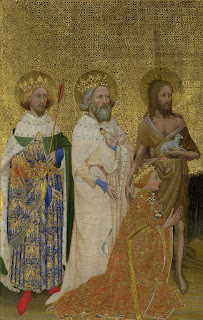 When the issue of Shakespeare's Catholicism or crypto-Catholicism, or Church Papism comes up, I always think of the Catholic language and imagery of his plays; the good friars, the true nun, etc. This article from The Guild of Our Lady of Ransom reminds us of how Shakespeare reminded his audiences of their Catholic past:Shakespeare lived during the worst religious division England has known. It has been remarked that one of the most curious aspects of his writing is the apparent absence of any plays on the main themes of the age – belief, religion, and the church. . .

Nevertheless, he was born when the Catholic religion was effectively in retreat and indeed under accelerating persecution, under forbidding injunctions intending that ‘there remain no memory of the same’.‍ . . .‍

The official hope was that Catholic belief and practice would abate with the dying out of priests, places of worship and the forms of prayer and devotion that legislation now banned. . . .
The author, Edmund Matyjaszek, then cites two examples of Shakespeare recalling very Catholic words, practices, and images, one from Richard II and the other from Henry V:
'I’ll give my jewels for a set of beads,
My gorgeous palace for a hermitage,
My gay apparel for an almsman’s gown,
My figured goblets for a dish of wood,
My sceptre for a palmer’s walking staff,
My subjects for a pair of carved saints,
And my large kingdom for a little grave,
A little, little grave … (Act 3, scene 2)
and
‘Do we all holy rites:
Let there be sung Non Nobis and Te Deum,
The dead with charity enclosed with clay:
And then to Callice, and to England then
Where ne’er from France arrived more happy men.’ (Act 4, scene 8)
He could have also cited Henry V's words about how he was trying to make up for his father's sins against Richard II, before the Battle of Agincourt:
Not today, O Lord,
O, not today, think not upon the fault
My father made in compassing the crown.
I Richard’s body have interrèd new
And on it have bestowed more contrite tears
Than from it issued forcèd drops of blood.
Five hundred poor I have in yearly pay
Who twice a day their withered hands hold up
Toward heaven to pardon blood. And I have built
Two chantries where the sad and solemn priests
Sing still for Richard’s soul. More will I do—
Though all that I can do is nothing worth,
Since that my penitence comes after all,
Imploring pardon. (Act 4, scene 1)
Although those last three lines seem to call the effectiveness of all those efforts of prayers and Masses for Richard's soul and his father's pardon into doubt. Nevertheless, as in Hamlet, Shakespeare has recalled the practice of Prayer for the Dead in Purgatory to the minds of his audience.
As Matyjaszek concludes his article:

How did the works of this possible crypto-Catholic (certainly one steeped in its imagery), spread throughout the whole world carrying this rich, resonant and sacramental imagery? At the core of all this is the “echo chamber of remembrance “ that is, in effect, the English language itself.‍

This continued to appear and inform the language and the culture throughout the 270 years of Catholic suppression, emerging to inform Newman’s ‘Second Spring’ that inspired the foundation of our Guild. This language not only underpins our country and its culture, but is still evident – and potent – in the most unlikely places today.
Posted by Stephanie A. Mann at 12:00 AM