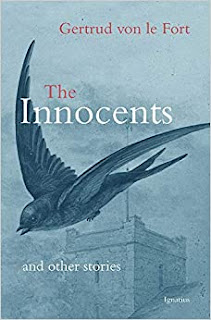 I purchased this book at Eighth Day Books a couple of weeks ago (and there's still copy on the shelf as I post this review!). According to the publisher, Ignatius Press:
Newly translated into English for the first time, these four novellas from the acclaimed German writer Gertrud von le Fort are from her later works of historical fiction. Ominous and mysterious, these page-turning stories bring to life momentous chapters in from the past.

The Innocents, set in Germany after the Second World War, is a poignant family drama about the horrors of war, the suffering of the innocent, and the demands of justice.

The Ostracized Woman traces the fate of a Prussian family at the end of World War II to the heroic deed of an ancestor done centuries before.

The Tower of Constance leads the reader into the heart of the infamous French prison of the same name while exploring the role of conscience in the religious and philosophical conflicts of the eighteenth-century.
Reading them in the translation by Michael J. Miller, what I noticed most was the tension and suspense that von le Fort created in each of these tales. Some great mystery, some great injustice, must be brought to reconciliation--through sacrifice, understanding, or mercy. Each story or novella is a moral mystery and each is effectively paced and plotted.

For the last two stories, I was happy, however, that I had read Antonia Fraser's Love and Louis XIV: The Women in the Life of the Sun King several years ago. It helped me understand the background of the moral issues of the Most Christian King and his defense of orthodoxy in France in the context of his adultery, conflict between his mistresses, their own desires to confess their sin and be absolved, and of course, his control of the Church.
I recommend this volume of Gertrud von le Fort's later works: they are thought-provoking and moving.
Posted by Stephanie A. Mann at 12:00 AM