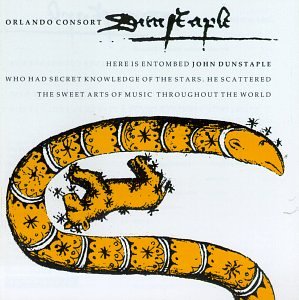 John Dunstaple or Dunstable died on December 24, 1453. As this website notes, he is sometimes considered the greatest English composer before William Byrd:

We know so little about him that almost the only sure historical fact is that he died on Christmas Eve 1453. Beyond that, the inscription of his epitaph describes his different professions, and in a book on astronomy in St John's College, Cambridge, he states in his own hand that he was a musician in the service of the Duke of Bedford.

The fact that much of his music survives in Continental sources suggests that his fame was widespread. Fifty-five works that are normally considered as by Dunstable survive, including two complete Masses (one isorhythmic) and several paired and single Mass sections, a large number of motets, and possibly two secular songs.

Thus all that we have of his music is in the form of liturgical or votive church music; what may be counted as secular music amounts to so little that even the most celebrated 'O rosa bella' is not his for certain. What is certain is that Dunstable was the greatest English composer before William Byrd. He was the man whose 'contenance anglaise' influenced music for a century. it did so abecause of his residence in France for a number of years as musician to John, Duke of Bedford—Henry V's brother and Regent of France from 1422 to 1435. It seems likely that the composer visited Italy also, judging from the number of his works that exist in Italian manuscripts. 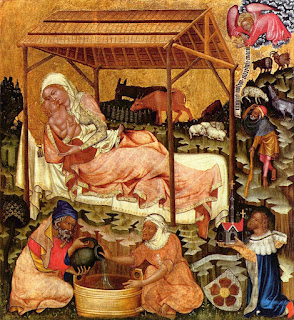 Of course he wrote many works in honor of the Blessed Virgin Mary, the Mother of God, including this one:

Knowing no man, the Virgin mother bore, without pain, the Saviour of the world. Him, the king of angels, only the Virgin suckled, breasts filled by heaven.

The cover of the Orlando Consort recording pictured above cites his epitaph. He was buried in St. Stephen Walbrook and a plaque with his epitaph was recreated after the church was bombed in the Second World War:

He is closed within this tomb who closed the heavens in his breast, John Dunstable. He, privy to the stars, with Urania his mentor, knew how to reveal the secrets of the sky. This man was your glory, O Music, your light, a prince for you; throughout the world he has spread your five sweet modes. Join to the year one thousand four hundred and fifty and three, on the day before the birth of Christ, his star was translated to the constellations; let the inhabitants of the sky receive to themselves a fitting fellow-citizen.

We are fortunate that John Dunstable's works were published on the Continent, because only 20 survive in English choir books. As the website at St. Stephen Walbrook notes, Dunstable had connections to one of the greatest Benedictine abbeys of Medieval England, St. Albans:

Dunstaple’s connections with St Albans Abbey are at least twofold:

The abbot John Whethamstede is associated with the Duke of Gloucester (who was buried at St Albans following his death in 1447), and Dunstaple’s isorhythmic motet Albanus roseo rutilat, possibly with some of the Latin words adapted by Whethamstede from an older poem, was clearly written for St Albans, possibly for a visit to the abbey by the Duke of Bedford in 1426.

Whethamstede’s plan for a magnificent library for the abbey in 1452-3 included a set of twelve stained glass windows devoted to the various branches of learning. Dunstaple is clearly, if indirectly, referred to in some of the verses the abbot composed for each window, not only music but also astronomy, medicine, and astrology.

This website has quite a bit of information about St. Albans Abbey at the time of its dissolution in December of 1539. The abbey church was saved for the community and there were hopes of re-establishing the monastery when Queen Mary I reigned. Now the church is an Anglican cathedral.The cathedral's website has news that the grave of Dunstable's abbot, John Whethamstede has been discovered!

Merry Christmas!
Posted by Stephanie A. Mann at 12:30 AM